Alex Katz: New York, a large-scale exhibition of the work of Alex Katz one of the most influential American artists of the past 50 years, comprises some 40 paintings and aquatints, focusing mainly, as the title suggests, on his relationship with his native city. It is the first exhibition to concentrate primarily on this aspect of Katz’s work. The exhibition presents many of his celebrated portraits, including those of his family – his wife and lifelong muse, Ada, and his son Vincent – and of his distinguished circle of friends, including poets, writers and artists, many shown against the backdrop of New York City. The exhibition also includes architectural views of the city, with its famous Manhattan sky line and Modernist architecture. 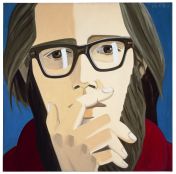 Katz is best known as a painter of people, and the wide cross section of his portraits featured in the show demonstrate the variety which he has brought to the genre. They include dramatic variations in scale, abrupt cropping of images, and such subtle artifices as appearing to place his subjects in a luxuriant outdoor setting, which is, in reality, another Katz painting. Pride of place among the portraits goes to the poets and writers, many from the New York School, who made up the artist’s circle of friends and whose names constitute a veritable who’s who of New York cultural life.

Alex Katz was born in Brooklyn, New York, in 1927 and studied at The Cooper Union in New York and at Skowhegan School of Painting and Sculpture in Maine. His work has been the subject of nearly 200 solo exhibitions internationally since he first exhibited in 1954. He became widely known internationally following a large-scale retrospective at the Whitney Museum of American Art in 1986 and a print retrospective at the Brooklyn Museum of Art in 1988. These were followed by major exhibitions of portraits and landscapes at the Saatchi Gallery, London, 1998, Galleria Civica di Arte Contemporanea, Trento, 1999, and Kunst und Ausstellungshalle der Bundesrepublik Deutschland, Bonn, 2002, and elsewhere.  In the summer of 2003, the first European exhibition devoted solely to the artist’s celebrated portraits opened at the Fondazione Bevilacqua La Masa in Venice. Alex Katz’s work can be found in numerous public collections worldwide.

The exhibition is presented in association with THE IRISH TIMES

A fully-illustrated catalogue, published in association with Charta, Milan, accompanies the exhibition with an essay by Juan Manuel Bonet and an interview with the artist by Rachael Thomas, plus an anthology of poetry, selected by the artist’s son, the poet Vincent Katz.