An installation by Irish artist Alan Phelan, Goran’s Stealth Yugo, 2009, commissioned by the Irish Museum of Modern Art, is on view in the fountain of IMMA’s Formal Gardens. Made in collaboration with the car designer Goran Krstiæ, from the Zastava/Yugo car factory in Kragujevac, Serbia, the work is presented as part of Alan Phelan’s solo exhibition at IMMA which runs from 22 July to 1 November 2009.

Goran’s Stealth Yugo, 2009, continues Phelan’s ongoing investigations into car culture where he has in the past worked with modified car enthusiasts on several projects. Over the past two years Phelan and IMMA have been working in unique collaboration with the car designer Goran Krstiæ, manufacturers of the infamous Yugo car, once a proud yet conflicted symbol of the former Yugoslavia. 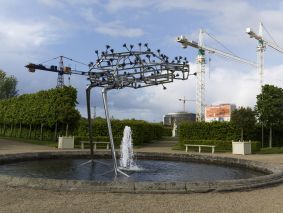 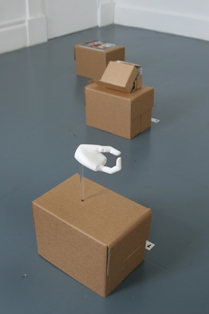 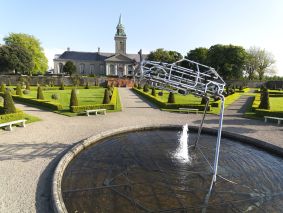 The genesis of the work began with an encounter between artist and designer during a visit to Zastava in 2006. Phelan asked Krstiæ to produce a CAD drawing of the car in production at the factory in the style of one of his ‘infrastructural’ sculptures. This then became the basis for the sculpture which was then further engineered to suit the site and historical sensitivities of the Formal Garden fountain. The work resembles a stage in the design process, where 3d modelling is used to approximate a structural framework for a new car design. This phase has been rendered in chrome-plated steel, supported by extended twin exhaust pipes, attached to an underwater stabilising base. The effect is both dynamic, as the car turns and points into the sky; as well as disguised, with the framework covered in Phelan’s signature fake pine twigs, drawn from the ‘blend-in’ techniques used in the telecommunications industry to hide mobile phone masts (generally as fake trees).

The meaning of the work is held in the title – ‘Goran’ is the acknowledgment of the collaborator car designer who designed and then fabricated the work; ‘Stealth’ infers that the work is improbably hidden, covered as it is with rubber pine twigs but also a subtle reference to the arms factory which was the historical starting point for the final word ‘Yugo’, now called Zastava, the car modelled on a Fiat 126 that was the great industrial success of the former Yugoslavia but ridiculed abroad for its poor design and reliability.