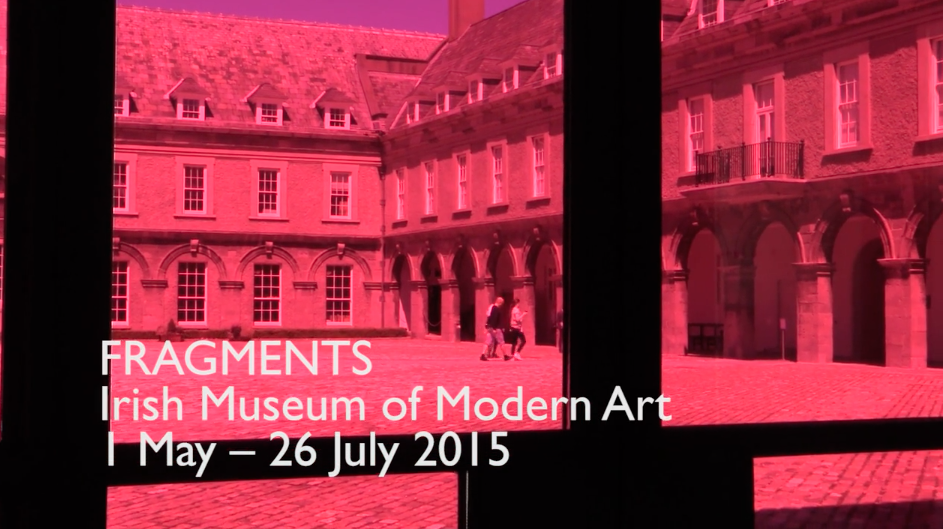 Marguerite O’Molloy (Collections, IMMA) introduces the current exhibition: Fragments, which will run until 26 July. Fragments encompasses a wide variety of examples from the IMMA Collection, ranging from the 1950’s through to contemporary works recently acquired for the Collection.

This exhibition borrows its title from Philosopher Walter Benjamin’s comparison of the work of translation to re-assembling fragments of a broken vase – the individual fragments must come together, but need not be like each other. This could also be taken as an allegory for exhibition making, or collecting.

The exhibition includes the first-showing since their acquisition of a number of recent works by Irish artists, including The sky looks down on almost as many things as the ceiling, (2013) a wall based sculpture by Aleana Egan and commissioned works by Ronan McCrea and Alan Phelan. The latter two are lens-based works titled Medium (Corporate Entities) and Include me out of the Partisan Manifesto, which resulted from IMMA’s programme of temporary exhibitions. McCrea’s photographic enquiry into spaces where corporate art collections are hung, took place before the economic collapse.

Caoimhe Kilfeather’s newly acquired lead sculpture Abbreviation, (2011) joins works by Michael Warren, Shirazeh Houshiary, Brian King and Kathy Prendergast selected from the IMMA Collection. These works have an aesthetic and historic affinity with the sculpture and drawing of Gerda Frömel – whose retrospective, will be running concurrently in IMMA’s Garden Galleries.

GILBERT & GEORGE’s large-scale photowork Smoke Rising, (1989), Nigel Rolfe’sDance Slap for Africa, (1983) and will be shown along with other activist works or works with emphasis on performance including a film by Phil Collins and historic works by Marina Abramović.
Fragments will include a number of Subjectivist works by WW II imigrès, the White Stag artists, bequested by the late artist Patrick Scott to IMMA in 2014.  Scott exhibited with the White Stag from 1941 and the group swopped each others paintings.  The donation is particularly rich in key works by Kenneth Hall who was a close friend of Scott.

Now in her 85th year, Camille Souter’s works included in Fragments are among some of her finest works of the 1950s and 60s and show her interest in Miró, Klee, Jackson Pollock and Arte Povera. In 1958 Lucio Fontana bought two of her paintings.

A pioneer of Conceptual Art and author of the renowned Inside the White Cube, Brian O’Doherty / Patrick Ireland’s enduring obsession with themes of language, perception and identity are represented by a selection of his works from the IMMA Collection dating from 1954 onwards and include a major new Rope Drawing which is a recent gift to IMMA by the artist, entitled: The doors to good and evil and the windows to heaven – Christina’s World,  Rope Drawing No # 124,  2015.

In the Silence of the Night. Summer Rising 2015 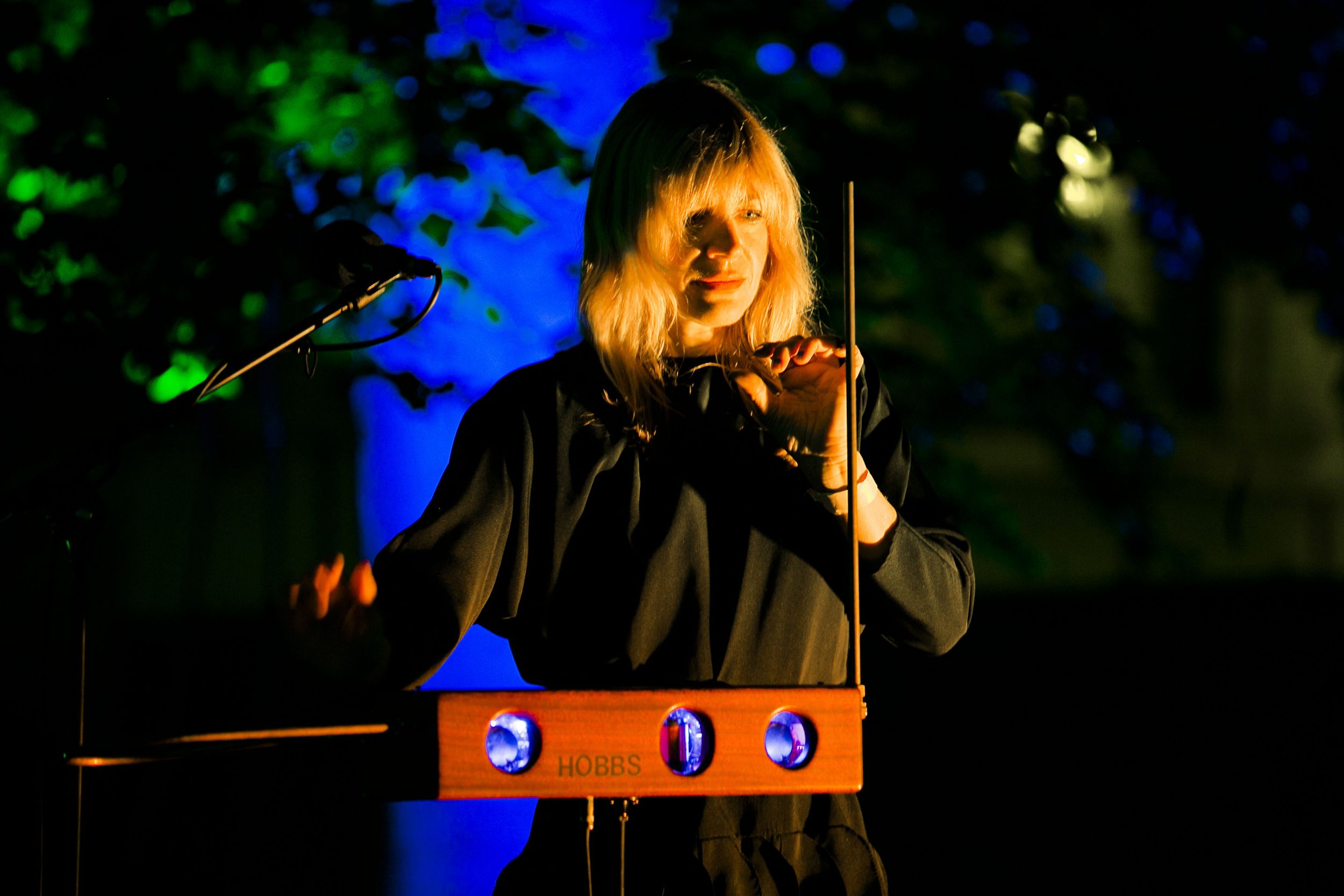 I went to a reading of Etel Adnan’s in the Serpentine last year and I was really taken with her use of language and with her exhibition at IMMA, and so the idea behind the curated series of performances at the IMMA Summer Party came about. In the Silence of the night is a line taken from Etel Adnan’s novel Sitt Marie Rose; the style of writing is a mixture of conversations, news bulletins, monologues, and interviews. The idea was to engage with open forms of expression, through spoken word, live art, sculpture and music. The performances were experimental in design but ultimately were a celebration of live gestures and collaborations. The performances were staged in the garden terrace, the courtyard and the formal gardens at IMMA, punctuating the evening. The garden terrace was intimate and allowed for the audience to come and go during performances. The night began with Ruth Proctor; tap dancers interpreting the sound of a Columbian rainstorm that was recorded by the artist. Each tap dancer did a solo interpretation until it reached a crescendo with three dancers on stage. The effect was immediate; drawing people from the gardens and the Great Hall by the amplified sound of the dancers. Dimitra Xidous’ rhythmic poetry set the stage for the first of the spoken word pe...
Manage Cookie Consent
By clicking “Accept Cookies”, you agree to the storing of cookies on your device to enhance site functionality and analyse site usage.
Manage options Manage services Manage vendors Read more about these purposes
Cookie Settings
{title} {title} {title}