Artist Emily Jacir has been actively involved in education in Palestine since 2000 including PIVF and Birzeit University. Over the past ten years she has been a full-time professor and active member of the vanguard International Academy of Art Palestine in Ramallah. By Emily Jacir
Tue Jan 31st, 2017 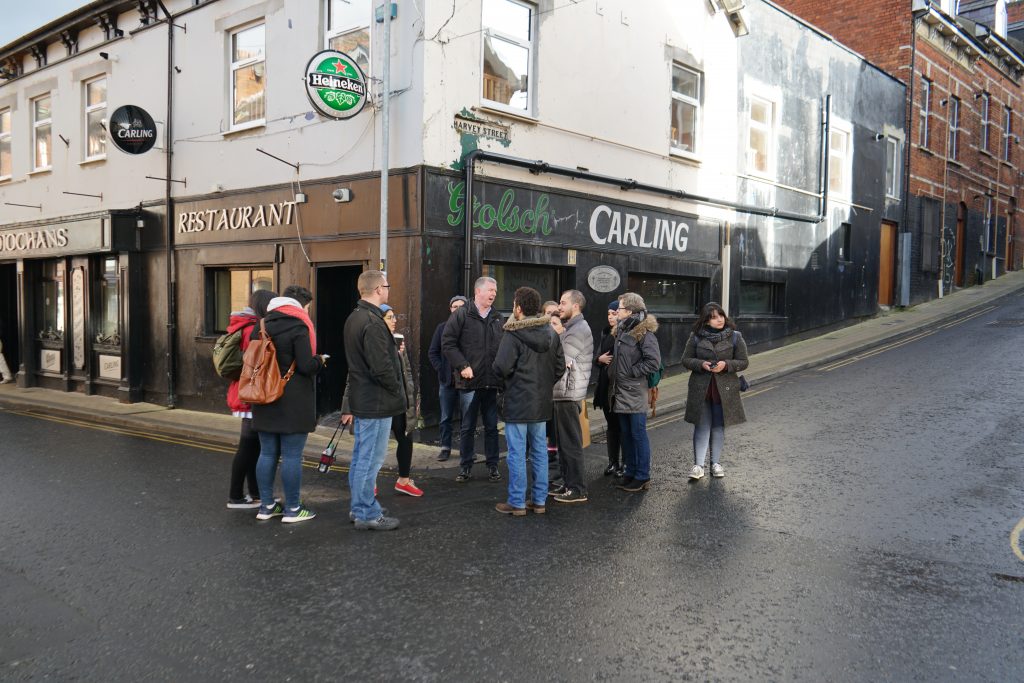 This month we are presenting “To Be Determined” a workshop with artist Emily Jacir in conjunction with her current exhibition at IMMA – Europa (26 November 2016 – 26 February 2017). Conceived and organised by Jacir the workshop is based around a student exchange and we are delighted to welcome her students from the International Academy of Art Palestine, Ramallah to Dublin. They are in IMMA to work with Irish students from colleges around Ireland including Limerick School of Art and Design (LSAD); Galway-Mayo Institute of Technology, Centre for Creative Arts and Media (GMIT  CCAM); the National College of Art and Design (NCAD), Dublin and Dublin School of Creative Arts, Dublin Institute of Technology (DIT).The workshop is taking place over two consecutive weeks in IMMA and also in a number of locations around Ireland, including Belfast, the Centre for Contemporary Art, Derry/Londonderry (CCA Derry~Londonderry), and the Burren College of Art, Co. Clare. Jacir has invited a number of artists and writers to contribute to the workshop including Gerard Byrne, Shane Cullen,Willie Doherty,David Lloyd, Declan Long, Conor McGrady, Áine Phillips, and Maggie Royanye. Below we hear from Emily Jacir and the participants in the programme, both artists and students, on their reflections after week one.

IMMA are hosting a brilliant initiative right now, as part of the extended Engagement and Learning programme around Emily Jacir’s show. Together with the museum, Emily has brought together a group of nine students, from the International Academy of Art Palestine, GMIT, LSAD, DIT and NCAD, for an intensive series of discussions and reflections around the politics and the art of Ireland and Palestine through the prism of Post-Colonialism. Parallels as well as differences are being teased out in the IMMA artist residency studios, as well as on bus trips to Belfast, Derry, and the Burren School of Art, where students are tapping into a network of ties that Emily has built up on Ireland and abroad with some of the more challenging and interesting Irish artists, including Willie Doherty, Shane Cullen, and writers like David Lloyd, and Declan Long. I’m involved, and really enjoying it.
– Gerard Byrne (Artist)

My workshop To Be Determined (for Jean) kicked off last Sunday January 23rd at the Irish Museum of Modern Art. My students from the International Academy of Art Palestine, Ramallah, joined Irish students from colleges around Ireland to take part in a workshop I designed and organized in conjunction with my show at IMMA Europa (26 November 2016 – 26 February 2017).

It was very important for me to conduct this workshop in tandem with my show for many reasons but namely because of the long relationship I have with Ireland its impact on my work. Many of the themes which run through my exhibition at IMMA are being touched upon in this workshop. Additionally the colleagues I have invited to contribute to my workshop are people I have been working with for decades and almost all have worked in Palestine. So the workshop is not only built along the lines of my own research, explorations and interests but also in line with a long history of exchange and collaboration with Willie Doherty, Conor McGrady, Gerard Byrne, Shane Cullen, and David Lloyd among many others.

In my view this workshop also joins an enduring history of solidarity between Ireland and Palestine and so we will also be investigating not only that history of solidarity and collaboration but also the current situation of Palestinian prisoners (the role of prisoners in both Ireland and South Africa played crucial roles in ending those conflicts) as well as popular techniques used by the Irish (and also South Africans) which have served to inspire Palestinian efforts to resist occupation. As Europa opened during the centenary of the 1916 Easter Uprising and with the shared history of British colonial rule in Palestine and Ireland (remnants of which still abound today) it was especially crucial to me to bring these students and thinkers together to examine these histories in a critical way.

This workshop has been such an amazing experience, from the trips to historically significant sites in Dublin, Belfast and Derry to the interaction with other students from Ireland and Palestine. The sharing of different views, opinions and ideas it has provided so much food for thought and source material for the development of artistic works. The warmth and hospitality of the accommodation has only been exceeded by that of all the people I have met at this workshop. – Conor Burke (GMIT – CCAM)

It has been amazing to meet the other students from Palestine and Ireland; sharing our perspectives and discussing our ideas has been mentally stimulating. The seminars, lecturers and visits to Northern Ireland taught me more about the conflicts and history, as well as learning more about the history and present of Palestine. Overall, the workshop has been overwhelmingly rich and fascinating, and I’m honoured to be a part of it. – Tuyen Tran (DIT) 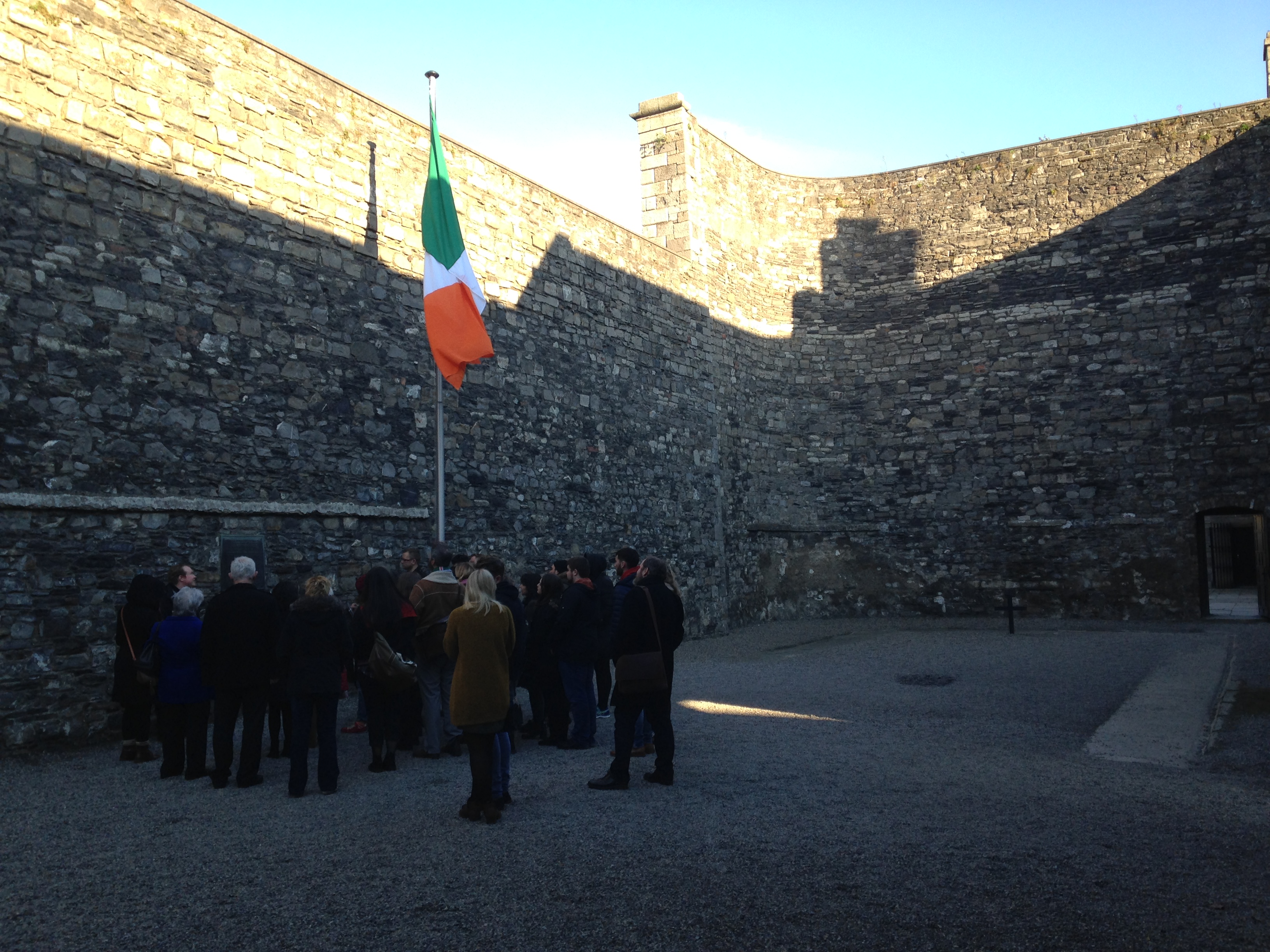 At the core of this workshop is a focus on the events and discourse surrounding the Easter Uprising of 1916 in Dublin. For this reason it was essential to me to organize a visit to Kilmainham Gaol (above) and the Royal Hospital Kilmainham (where IMMA is housed) upon arrival in Dublin so that the students would understand the site and buildings in which we are working in and having our discussions in. I invited my colleagues to lead seminars that would interrogate themes such as resistance, the right of return, martyrs, independence, remembrance and commemoration from a variety of different perspectives.  We kicked off the first half of the week with a fantastic seminar led by David Lloyd called “Founding Violence:Rethinking Easter 1916”.

In investigating the postcolonial condition of Ireland, we are examining how this violent colonial history and these invasive disruptions of social, cultural, religious and political orders play out in contemporary Ireland today and how it continues to shape our present condition.  Wednesday we headed to Belfast for a tour of the Falls Road Murals guided by a former political prisoner. This was followed by a seminar with former political prisoners from the Republican and the Loyalist communities, as well as a former British soldier. 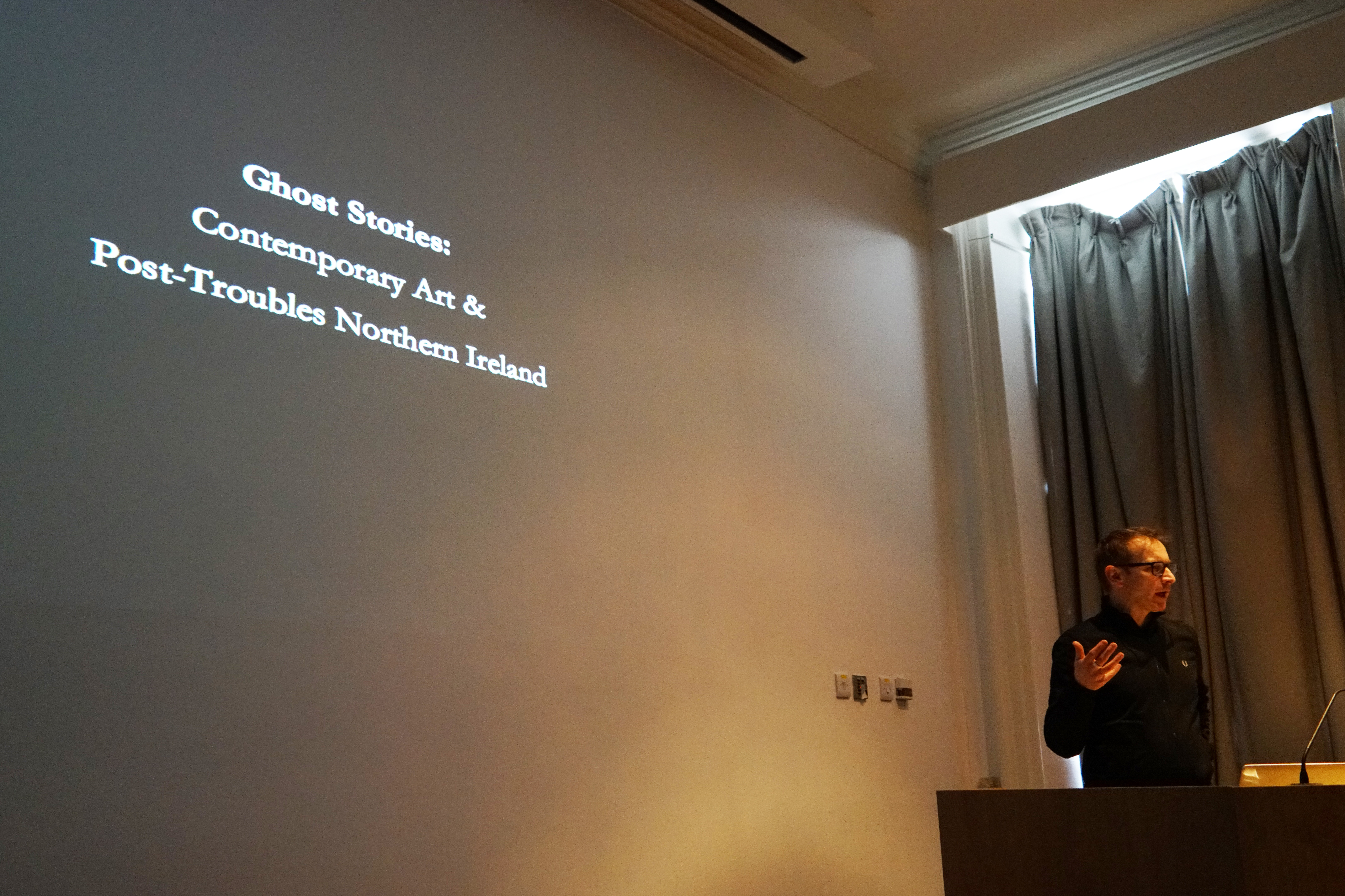 After our return to IMMA we continued the workshop with a couple of seminars led by artist Gerard Byrne exploring the role of the artist in imagining the state. In smaller group meetings with Gerard, the students were able to start to process the impact of the workshop in relation to their own practices. Declan Long’s seminar on Friday “Ghost Stories: Contemporary art and the uneasy peace of post-conflict Northern Ireland” (above) presented us with various forms of concrete examples of art projects.

We completed this first week with a trip to Derry, which included a seminar with Willie Doherty at CCA (where we were hosted by CCA Director Matt Packer and Curator Sarah Greavu . Willie spoke about his practice and his very personal relationship to this place and then led us on an intimate walking tour of Derry which included the sites of his works, as pictured below. 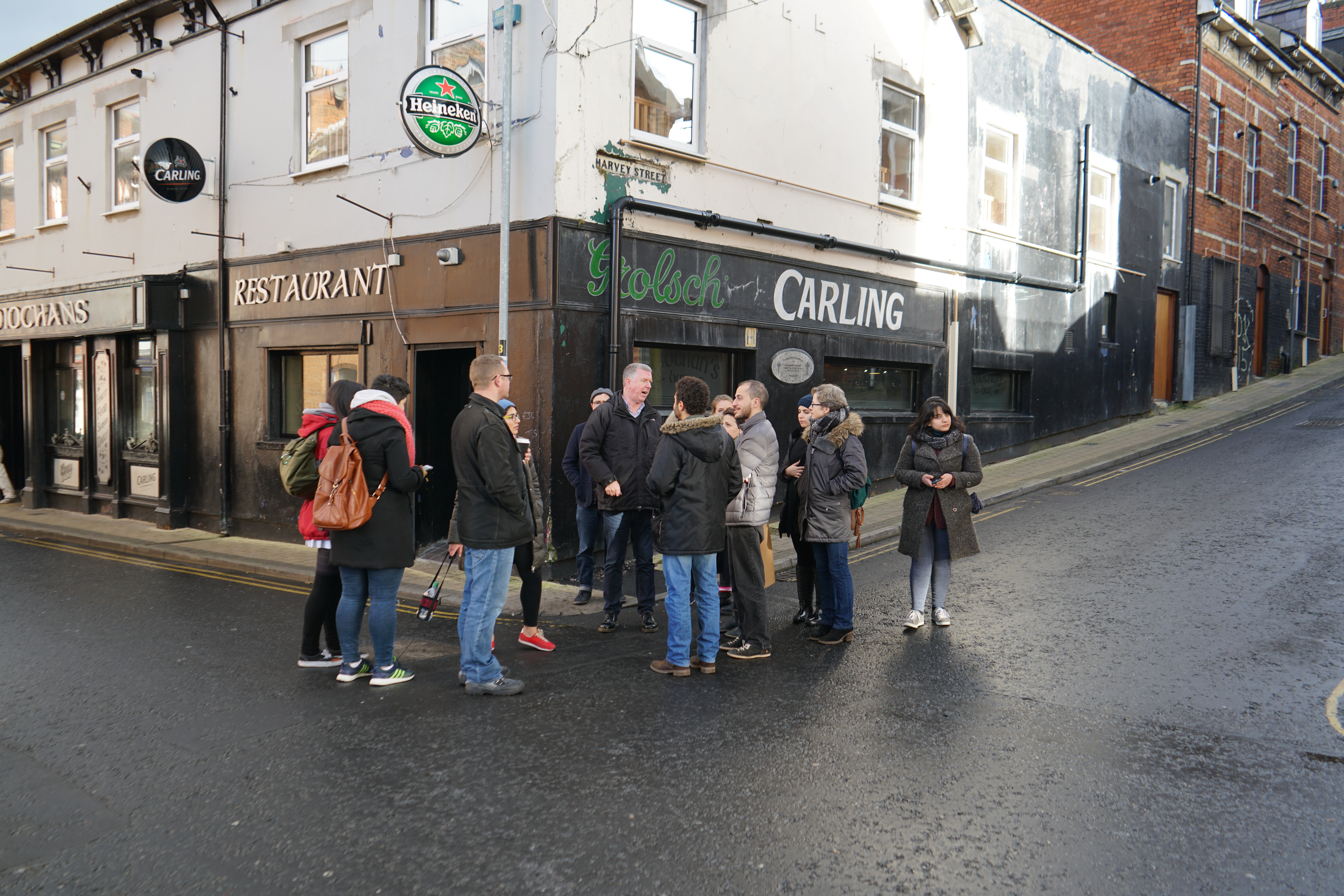 Being in Ireland made me realize even more that fighting against injustice, oppression and discrimination is a global fight and not only a Palestinian one, regardless of demographics, geography, culture or religion. Also, listening to all these historical and social struggles the Irish overcame drew a very promising picture of freedom in the near future for Palestine.Also, being around the liberal and distinguished minds of the Irish and Palestinian students, and having the opportunity to visit the outstanding artworks at IMMA has been a great influence and motivation on me.In short, I just loved the smiling faces, the loving hospitality and the passion for politics I’ve seen in the Irish. – May Marei (IAAP)

You can hear more from Emily about her current exhibition at IMMA here (video) The exhibition is free of charge and runs at IMMA, Dublin until 26 February 2017.

In 2003 O.K. Books published belongings. a monograph on a selection of Jacir’s work. A second monograph was published by Verlag Fur Moderne Kunst Nurnberg (2008). Her book ex libris was published in 2012 by Buchhandlung Walther König, Köln. In 2015 The Khalid Shoman Foundation published A Star is as Far as the Eye Can See and as Near as My Eye is to Me the most extensive monograph to date on Jacir’s work in English and Arabic. The most recent publication on her work are Europa which accompanies the exhibitions at Whitechapel and IMMA. Earlier this year NERO, Roma published TRANSLATIO about Jacir’s permanent installation Via Crucis at the Chiesa di San Raffaele in Milano. She has been actively involved in education in Palestine since 2000 including PIVF and Birzeit University. Over the past ten years she has been a full-time professor and active member of the vanguard International Academy of Art Palestine in Ramallah. She conceived of and co-curated the first Palestine International Video Festival in Ramallah in 2002. She also curated a selection of shorts; “Palestinian Revolution Cinema (1968 -1982)” which went on tour in 2007. Jacir is on the faculty of Bard MFA in Annandale-on-Hudson, NY.

As we enter the final weekend of Emily Jacir’s exhibition at IMMA ‘Europa’, ending this Sunday 26 February, we hear from Emily Jacir on the second week of her workshop “To Be Determined (for Jean)” which too... 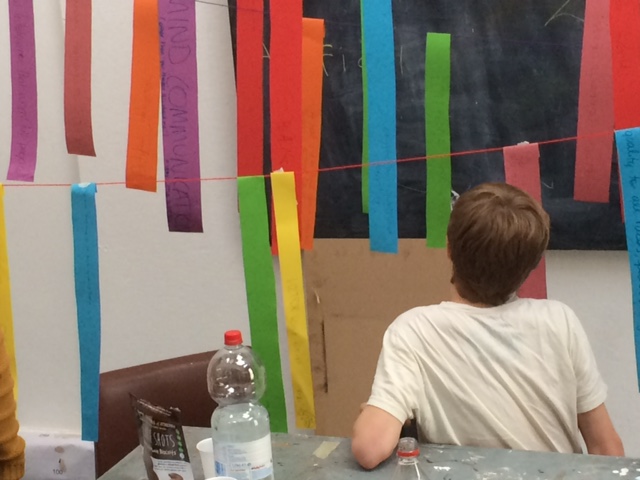 This October IMMA hosted an exciting workshop for teens, as part of Irish Architecture Foundation’s Open House Dublin.The session was an exploration of space and time by an impressive group of young people, and was facilitated by Paola Catizone and A. Legarreta ('maken') from the IMMA Visitor Engagement Team. As we look back at the year that was we wanted to capture some of our highlights, so have asked Paola and maken to share their memories of the event. The overall theme for the workshop was Time, Space and Presence, which takes as its cue the current exhibition IMMA Collection: A Decade. This collection exhibition is framed by a defined period of time - the last decade - and  includes many works that are time-based or time-related. Many of the works also underline the importance of ‘presence’. In our workshop we engaged with several different spaces at IMMA: the grounds; the West Wing Gallery to view A Decade, and Studio 10 - one of the studio spaces on site. We focused on the contrast between linear time (where time is an absolute physical reality, and where the passage of time is independent of consciousness) versus ‘being in the now’, and on the effect of architectural space on human daily experience. We started in the grounds of IMMA with maken, using a Time Mac...
Manage Cookie Consent
By clicking “Accept Cookies”, you agree to the storing of cookies on your device to enhance site functionality and analyse site usage.
Manage options Manage services Manage vendors Read more about these purposes
Cookie Settings
{title} {title} {title}