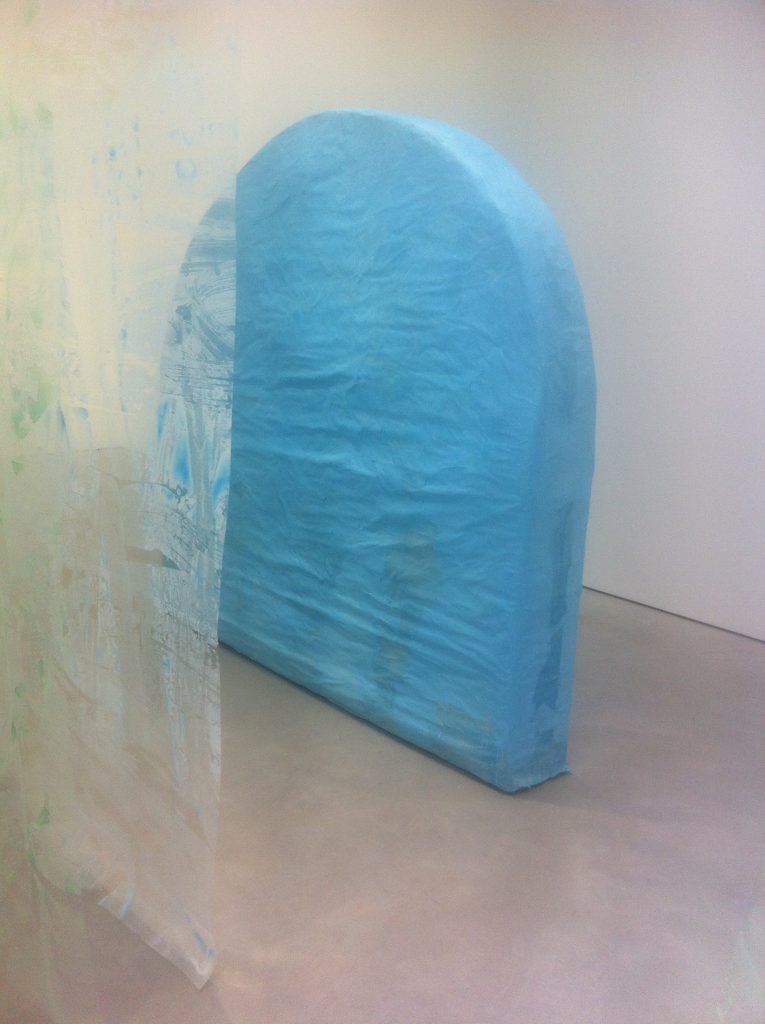 October is the month that the art world flocks to London for the week long contemporary art fair known as Frieze.  The Fair now also includes Frieze Masters where your cheque book can get you anything from a Rembrandt to a Francis Bacon.

But there’s more to ‘Frieze Week’ in London than the commercial interests of auction houses, galleries and art collectors.  October in London provides a glimpse into some of the best emerging and established contemporary art.

IMMA’s Exhibitions and Collections curators were navigating their way through Regent’s Park, Shoreditch and Bermondsey to see familiar favourites and emerging standouts alike; some soon to be shown at IMMA including Karla Black and Linder Sterling at Stuart Shave/Modern Art, Conrad Shawcross at Victoria Miro and Stan Douglas at David Zwirner.

1.  Brian O’Doherty at Simone Subal, Frieze Focus
A unique collection of outstanding Conceptual and language-based artworks by Brian O’Doherty mainly from the 1960s and 70s, such as you never see in one place these days and which have now gone to various museum and private collections.  Chris Dercon described O’Doherty at Simone Subal as ‘the best in this section of Frieze.’  O’Doherty is one of those very rare Irish artists of his generation that achieved major international stature and who provides lineage for so much contemporary practice.

2.  mothers tankstation, Frieze Focus
Ara Dymond – what a find.  He is a young artist from Hawaii whose sculptural works here are made from hoodies dipped in silicone placed on transparent Perspex plinths inside of which are sand bags, floating yet weighty…a new confrontation of object and support with overtones of a showcased designer collection.
Also, Fergus Feehily’s small white panel, disappearing save for the glow of its painted sides…wonderful.

3.  Turner Prize Shortlist at Tate Britain
Dublin born Duncan Campbell is far and away the best of the Turner Prize shortlist.  The film It for Others is a tour de force that explores the documentary presentation, mechanisms of staging and the power of juxtaposed images to prompt and shape how we think about and perceive culture.  Especially striking are the Constructivist style sequences of dances in black on a white ground. Filmed from above by Campbell, with choreography by Michael Clarke.

5.  Modern artists under the radar at Frieze Masters
Romare Bearden at DC Moore Gallery & Ray Johnson at Richard L. Feigen & Co. Both of these artists’ work seems to be making a comeback over the past 10-15 years and for good reason.  Their art has been under the radar for a long time, so it’s refreshing to see them at Frieze Masters, both of which have works in IMMA’s Novak O’Doherty Collection.

2.  Ed Fornieles at Chisenhale Gallery, Bethnal Green
There were children bouncing around, hot tubs bubbling away, actors as hipster parents walking around with the visitors, while adult entertainment looped on old TV sets in the corners.  It was surreal and strangely fun.

4.  Linder Sterling at Modern Art, Frieze
Linder Sterling’s work will be a part of IMMA’s Primal Architecture opening 7 November.  We are also really excited to have one of her Limited Editions available in the IMMA Shop!

1.  Kate MacGarry, London, Frieze
MacGarry showed a strong booth focused on a single artist Goshka Macuga whose complex research-led practice demanded in-depth consideration, and the use of the booth space was really clever.  From a false wall, hung a large monochrome tapestry depicting the living room interior of one of the trustees of the MCA Chicago, where Macuga recently completed a year long residency.   The tapestry formed the theatrical backdrop to gallerists seated on adapted Eames chairs whose Perspex seats were shaped around photographs of Angela Merkel and other characters from Macuga’s Preparatory Notes for a Chicago Comedy.

2.  Franz Erhard Walther, Frieze Live
Two pieces by Franz Erhard Walther from 1968 & 1975 used the newly designed floor space of the fair really well.  Although placed prominently, some visitors seemed to ignore the space – perhaps because the performance piece was without the ubiquitous booth walls.  The area was delineated by metal floor sculpture and a plinth, both serving as elements within the performances.  These were quiet, thoughtful actions that brought a welcome stillness and contemplation to the buzz of the fair.

3.  Antony Gormley Studio
During Frieze, I did a studio visit to Antony Gormley’s.  He will soon be visiting IMMA to discuss the commissioning of Still Falling I currently installed in our First Floor Galleries.  During the visit, it was great to see the new direction his work has taken and to see the scale model for his planned solo show at Galerie Thaddaeus Ropac in Paris – a booth also at Frieze  that showed a single imposing large steel structure by Gormley called Turn IV.  From his Expansion series, the sculpture gave a sense of how impressive the Ropac show will be with 62 such figures occupying a 4,700 square meter space (the gallery was formerly a factory that produced heating systems on the outskirts of Paris).

4.  Standout Sculpture at Frieze
Sculptures by installation artists Agnieszka Kurant, Sara Sze and Lee Bul were modest in scale due to the nature of the fair, but it was nice to see their work.   Kurant’s pile of shiny coins bouncing light off the booth walls produced from 25 cent coins where the phrase “quarter dollar” was replaced by the phrase “minus one dollar.” Oh, and Michael Craig Martin’s giant scissors in the Sculpture Garden.  His painting from the IMMA Collection Eye of the Storm is currently on show at IMMA until 9 November.

And a few more…

Highlights from the week also included Anselm Kiefer’s “most significant exhibition in the UK” to date at the Royal Academy of Arts (Royal Academy), Joyce Pensato at Lisson Gallery whose work sold out at the stand (ArtNews),  Idris Khan’s Nude Descending Staircase at Victoria Miro, Sigmar Polke at Michael Werner, Pakistani artist Imram Qureshi at Corvi-Mora Gallery and Helly Nahmad Gallery’s The Collector at Frieze Masters. 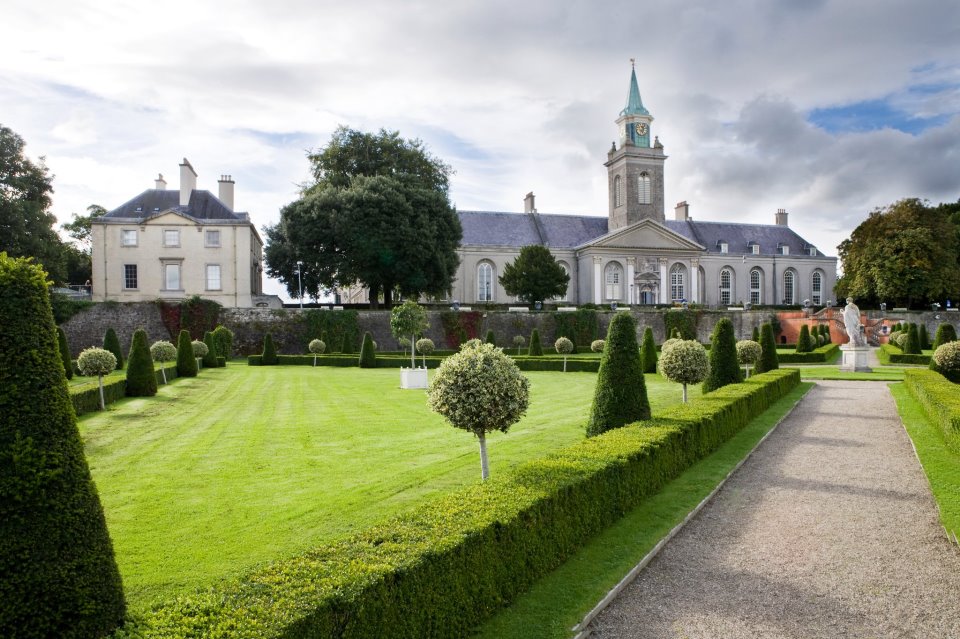 [caption id="attachment_503" align="alignleft" width="300" class=" "] For image credits see footer[/caption] Join us for a weekend programme of activities including the opening of our winter exhbitions Duncan Campbell and Primal Architecture, talks, tours, and music drawn from the exhibitions across IMMA. IMMA’s Winter Opening Weekend Friday 7 November Preface lecture :: Primal Architecture 1pm – 2pm, Lecture Room, FREE Mike Kelley: Lent Felt (Intimations of his Mind's Fall), with John C Welchman Presented in partnership with IADT ARC, this is a valedictory lecture on the life and work of Mike Kelley; artist, noise musician, writer, actor, benefactor, teacher and Catholic misfit. Kelley's work 'Primal Architecture' has lent its name to the group exhbtiion, and in this lecture Kelley's powerful contribution to contemporary art will be examined by John C. Welchamn, including his influential body of critical and creative writings and his special brand of parodic humor and irony and aesthetics.  Read more> 6.00 – 8.30pm, Official opening of Duncan Campbell and Primal Architecture. If you'd like to attend the opening please join our mailing list here (make sure you tick 'Invitations'). The opening of Primal Architecture includes live performances: Kevin Atherto...
Manage Cookie Consent
By clicking “Accept Cookies”, you agree to the storing of cookies on your device to enhance site functionality and analyse site usage.
Manage options Manage services Manage vendors Read more about these purposes
Cookie Settings
{title} {title} {title}