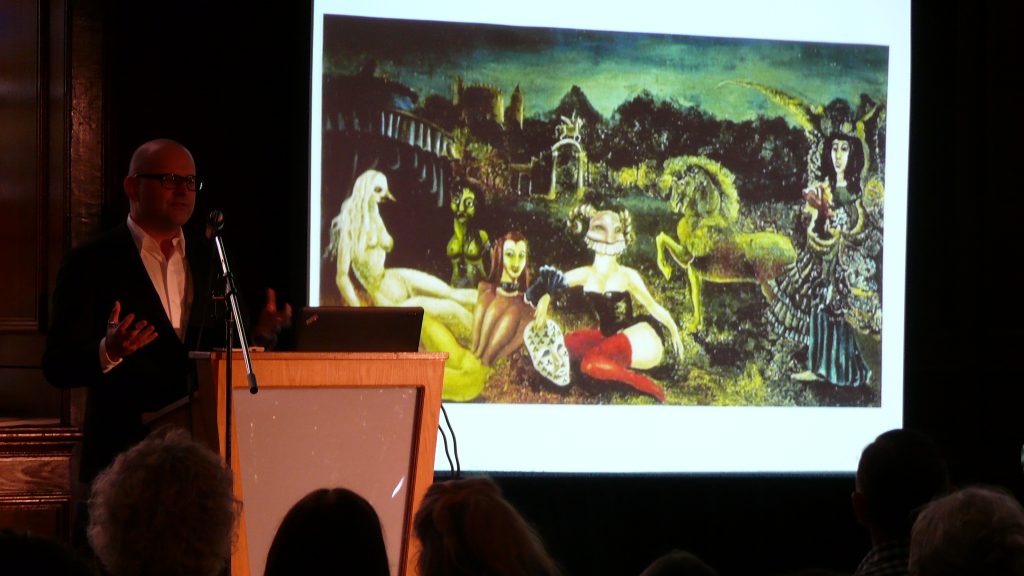 One of the highlights in the Carrington Talks series so far has been the recent Seminar Rediscovering Leonora Carrington.

Leonora Carrington was the sort of artist everyone had a story about, and no more so than the impressive group of scholars who gathered in IMMA’s Baroque Chapel on Tuesday 17 September to present their lifelong interest in, and research on, Carrington’s work. Roisin Kennedy (Chairperson) , Seán Kissane (Exhibition Curator), Dawn Ades , Alyce Mahon, Guilia Ingarao, Teresa Arcq and Susan Aberth all gave in-depth interpretations of the rich iconography involved in Carrington’s paintings. The speakers shared their extensive research including her involvement with Max Ernst and Edward James and the Surrealist movement as well as her friendships with other female artists.

The day’s presentations opened up contexts on the artist’s interests in Irish literature, Celtic mythology, alchemy, magic, the occult and the animal world, all of which illustrated the significance of the artist’s past, her Irish and Mexican connections and her awareness of colonial issues.

One of the best parts of the Seminar was seeing Leonora Carrington through the eyes of the speakers. To them, she was the creator of imaginative stories, paintings, tapestries, drawings, sculptures and murals.

Speakers talked about Carrington’s inspirations and if she was inspired by the “real” or her own “imaginary worlds.” They gave accounts of the artist’s creative process, such as her humorous play on title, text and image. They also spoke about Carrington’s refusal to discuss her art or tie it down to any conclusive analysis. So it was only though her eclectic interests, family roots and fascinating life experiences that analysis was provided. Roisin Kennedy called this “the archaeology of Carrington’s psyche.”

Overall, the views expressed in the Seminar were both dynamic and informative. It seemed the inherent challenges for the curator or art historian studying Carrington was deciphering “the imaginative” from the “autobiographical” in her work. But exhibition curator Seán Kissane, who has spent the past four years bringing The Celtic Surrealist to life at IMMA, asserted that Carrington’s figurative dreamscapes were better placed in “the politics of the real world” and not her imagination.

So much was said that a blog can barely scratch the surface of the Seminar, but here’s a quick recap of the day’s talks.

Sean related to the Irish folklore stories told to Carrington by her Irish mother and nanny as well as his own childhood experiences of growing up in mythological Ireland and hearing stories of the Sidh. He said, “Being Irish is not knowing what is real or the imaginary. Though one still exists in a metaphorical space where you find real issues and real politic in the artist’s work.”

Dawn described Carrington’s friendship with her biggest supporter the Surrealist collector Edward James. “Both shared and fled a similar background: a social world of arcane rituals, subtle hierarchies, sacrifices and feasting traditions of country England.” She quoted Edward James, “Carrington’s paintings are not painted they are brewed.” And Dawn asserted that James was the first to claim Carrington’s Celtic inheritance.

Alyce discussed how Carrington initiated her on-going studying of eroticism, art and Surrealism. She focused on Carrington’s work as a writer of “quasi autobiographical stories” that led Mahon to Mexico and New York as a young scholar to investigate Carrington’s “prototype feminist work” as a part of the female Surrealist tradition. Mahon expressed the poetics of coming to see this retrospective at IMMA.

Roisin Kennedy, Alyce Mahon, Dawn Ades and Seán Kissane shared their views on how it was Art Historians failed to recognise the true merits of Carrington’s work and not the other surrealists.

Giulia discussed details of the house Carrington decorated with Ernst in Saint-Martin-d’Ardèche in a 1938 show. She said, “The artist’s first experiments in sculpture [connects to] the tapestries she created in Mexico in the 1950s with her husband Emerico Weisz and with the help of a family of native artisans.” Both the tapestries and house revealed Carrington’s rich anthropomorphic interests in the hybrid animal worlds, a theme she continued to research during her most productive years in Mexico.

Teresa explained that Ireland and England have a long history of magic and witchcraft and that this was a subject that interested Carrington throughout her entire life. Kurt Seligmann’s book The History of Magic and the Occult was fundamental for Carrington and cropped up in her paintings over the years: from the origin of the oracles to the history of magicians from antiquity such as Zoroaster, Paracelsus, Giordano Bruno and the first female alchemist “Mary the Jew.”

The last presentation was made by renowned author Susan Aberth who wrote the first monograph on the artist Leonora Carrington, Surrealist, Alchemy and Art (2010), and travelled from New York especially to present her paper Carrington’s Multivalent Occult Imagery. Susan explained, “the Catholicism of Mexico, with its incorporation of indigenous sacred beliefs, was something Carrington could understand. Educated in a series of Catholic schools, Carrington was well aware of their mystical doctrines and beliefs.”

Roisin Kennedy, Giulia Ingarao, Teresa Arcq and Susan Aberth all reflected on Carrington’s work and why female Surrealists were attracted to Mexico in the forties and fifties instead of New York. Teresa explained the ethnic and political structures of Mexican Society during that time, and the panel commented on Carrington’s broader commitment to spiritualism and her relationship to audience. Aberth said, “Carrington never thought of the audience at all in making her work. She believed whoever was meant to see it, would see it.

Having seen how Carrington’s work re-ignited the general appeal of Surrealism, it was no surprise that the seminar attracted large audience of lecturers, art historians, curators and a cross generation of artists including Alice Maher and Janet Mullarney. It was also a pleasure to see Leonora’s son and grandson enjoying the seminar.

I thought that for all who attended, the Seminar revealed the complexities that underlay the work of this unique artist, writer, mother and endearing friend to those who so fondly spoke of her. Having heard the wonderful insights into what motivated Leonora from the most esteemed Carrington scholars, I believe that a real scholarly consensus on the value of Carrington’s oeuvre has been achieved.

Coming Up…Pioneering scholar, the brilliant writer, Whitney Chadwick will share her personal recollections of Carrington in a conversation with Seán Kissane on Thursday 3 October at 6.00pm at IMMA. Tickets are free and can be booked here.

Looking forward to sharing more Seminar podcasts with you, shortly!

Marguerite O'Molloy: Installing One Foot in the Real World 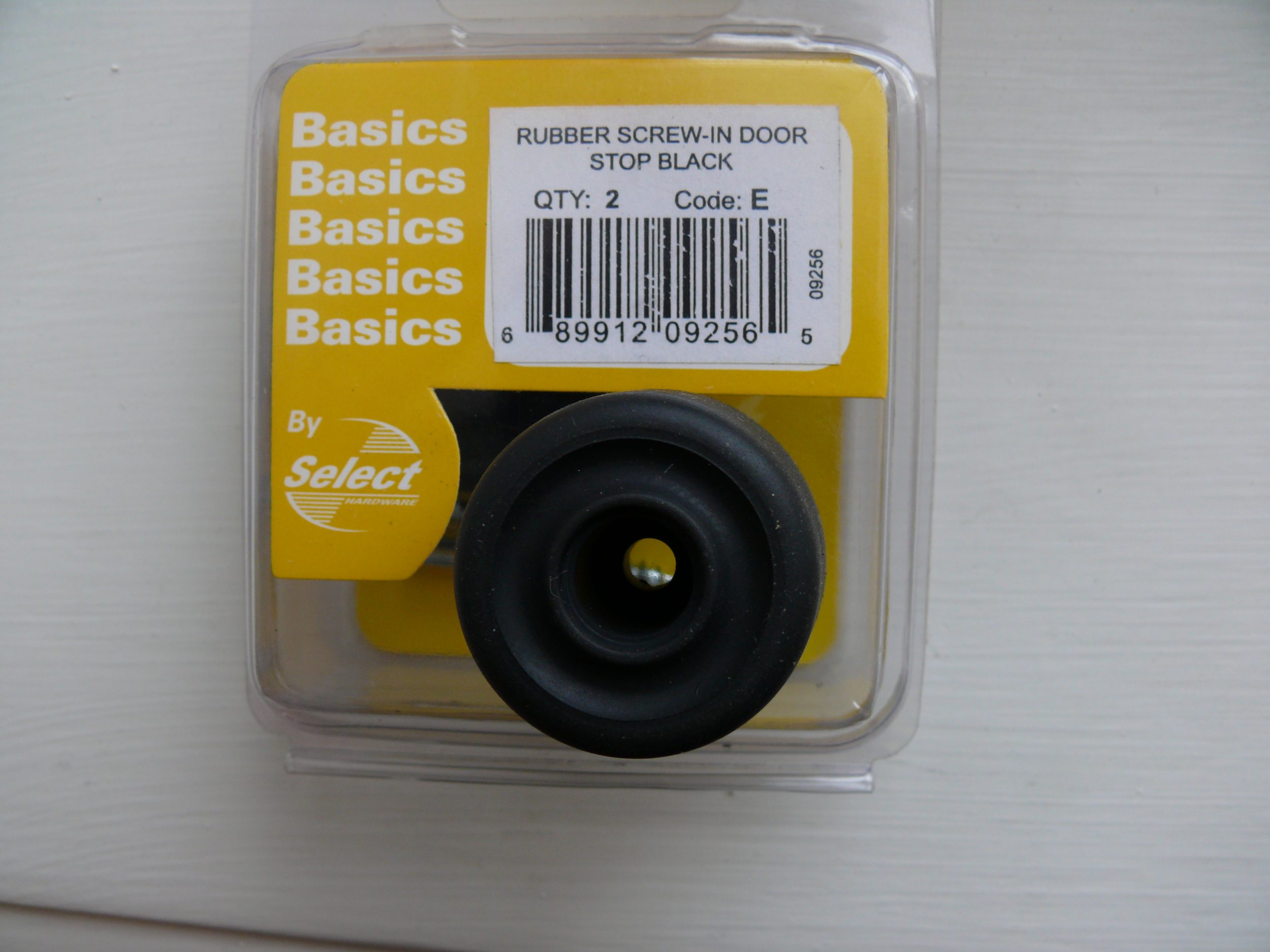 I am really honoured to have the enviable job of curating the forthcoming exhibition from the IMMA collection. Someone once asked me if curating from the collection was like being a kid in a sweetshop; in some ways it is. You are spoilt for choice with over three and a half thousand works to select from; but that number does not reflect the variety and complexity of the works. So where to start? The idea for the exhibition One Foot in the Real World developed over some time, I was looking at themes thrown up by the temporary exhibitions that we are going to be showing come our major relaunch in October. What piqued my interest was Eileen Gray’s fascination with transformation; Leonora Carrington’s depictions of surreal domestic interiors and Klara Liden’s subversion of public space. I started to plan an exhibition which was an exploration of scale and the body and the psychology of space and included lots of basic everyday objects - like tables, doors, windows, keyholes, bricks and mortar! I was particularly excited that we were building a large brick structure to house Mark Manders Reduced Summer Garden Night Scene, 2002. Manders had made a number of versions of this night-time landscape, and this version was shown twice previously at IMMA – first in Mark’s solo show Paralle...
Manage Cookie Consent
By clicking “Accept Cookies”, you agree to the storing of cookies on your device to enhance site functionality and analyse site usage.
Manage options Manage services Manage vendors Read more about these purposes
Cookie Settings
{title} {title} {title}