IMMA, The Irish Museum of Modern Art, is pleased to announce highlights from our 2015 exhibition programme.

In announcing details of the programme today Sarah Glennie, Director of IMMA, commented:

“We are delighted to present another dynamic programme for Ireland in 2015, where a key highlight is sure to be the autumn exhibition What We Call Love, co-curated by Rachel Thomas, Head of Exhibitions at IMMA and Christine Macel, Chief Curator at Centre Pompidou. It will include works from Cecily Brown, Miriam Cahn, Elmgreen and Dragset, Jim Hodges, Jeremy Shaw and Wolfgang Tillmans among others and we are delighted to be working with the Pompidou again after our successful collaboration in 2013 with the Eileen Grey exhibition.”

“Over the course of the year we will mount the first major Irish exhibitions from internationally renowned artists Stan Douglas and Karla Black, as well as an exhibition of the work of poet, artist and writer Etel Adnan; one of the leading voices in contemporary Arab American literature since the 1960s. As part of our commitment to supporting new artists we present Chloe Dewe Mathews, a remarkable new artistic voice working in the medium of photography and Diogo Pimentão in their first Irish exhibitions, as well as a number of new commissions forming part of What We Call Love.”

“I’m delighted to be presenting a major exhibition by Grace Weir, one of Ireland’s most distinctive and important contemporary artists, and continuing our scholarly appraisal of Modern Irish Art with our forthcoming retrospective of the work of Gerda Frömel (1931 – 1975). As in 2014 our exhibition programme will be accompanied by a rich and varied programme of events, talks, and learning programmes which will provide audiences of all ages exciting opportunities to enjoy the our programme.”

IMMA Collection
There are several exhibitions throughout the year that draw from the IMMA Collection. In the spring we present Fragments, with works from Aleanna Egan, Ronan McCrea, Alan Phelan, Camille Souter, GILBERT & GEORGE, Nigel Rolfe, Marina Abramovic, Brian O’Doherty and Kenneth Hall. This will be followed in November with artist Nick Miller’s response to the Edward McGuire studio, part of the IMMA Collection, in Meetings: Into the Studio of Edward McGuire. A concurrent exhibition, Approaches to Paper, will explore the practice of celebrated Irish Modernists such as Evie Hone and Mainie Jellett to contemporary artists such as Antony Gormley, Andrew Folan and Kiki Smith.

FESTIVAL
Our new festival Summer Rising, which was such a success last year, will return in June with more art, music, performance and food events designed to open up the beautiful buildings and grounds of IMMA, day and night.
IMMA Exhibition Highlights 2015

Gerda Frömel
9 April–5 July
This exhibition will be the first contemporary retrospective of Gerda Frömel, an artist who was born in Czechoslovakia in 1931 as the daughter of German parents but who moved to Ireland in 1956. An incredibly well regarded artist during her lifetime, her work is no longer well known and has not been on exhibition since a 1976 retrospective at the Hugh Lane Municipal Gallery of Modern Art, Dublin the year after her untimely death. This exhibition seeks to bring new work to light and to reinstate Frömel as a modern Irish master.

Diogo Pimentão
9 April–5 July
This will be the first Irish solo exhibition of Portuguese artist Diogo Pimentão. Timed to coincide with Gerda Frömel, Diogo’s practice seeks to open the horizon of the drawing and its conventions to other dimensions, other processes and other tools.

Fragments
24 April–26 July
This exhibition borrows its title from Philosopher Walter Benjamin’s comparison of the work of translation to re-assembling fragments of a broken vase – the individual fragments must come together, but need not be like each other. This could also be taken as an allegory for exhibition making, or collecting.

Karla Black
1 May–26 July
Karla Black is regarded as one of the pioneering contemporary artists of her generation. Experimenting with ways to float material, form and colour at eye level remains a constant preoccupation in Black’s work. This preoccupation will form a key thread in the exhibition at IMMA, which will present Black’s extraordinary creative output through a series of new works tailored for the spaces here, revealing the artist’s free, experimental way of working combined with a careful aesthetic judgement.

Etel Adnan
6 June–13 September
Poet, artist and writer Etel Adnan was born in 1925 in Beirut and currently lives between California and Paris. Adnan studied literature at the Sorbonne, Paris, and philosophy at U.C Berkeley and Harvard. In 1984, she worked with Robert Wilson on his opera CIVILwarS and has exhibited internationally. Her recent publications include Master of the Eclipse (2009), Seasons (2008), In the Heart of the Heart of Another Country (2005), and In/somnia (2002).

What We Call Love
12 September 2015–2016
What We Call Love asks what does love mean in a society based more and more on individualism and consumption? How has the concept of love in the twentieth century evolved over time, and in what sense does it permeate art, from Surrealism to now? How does art represent love and what does it tell us about what love means in our contemporary culture?

Chloe Dewe Mathews: Shot at Dawn
10 October 2015–2016
Shot at Dawn is a new body of work by the British photographer Chloe Dewe Mathews that focuses on the sites at which British, French and Belgian troops were executed for cowardice and desertion between 1914 and 1918. The project comprises images of twenty-three locations at which the soldiers were shot or held in the period leading up to their execution. All are seasonally accurate and were taken as close as possible to the precise time of day at which the executions occurred.

Grace Weir : 3 Different Nights, recurring
6 November 2015–6 March 2016
IMMA presents an exhibition by one of Ireland’s most respected artists; Grace Weir. The exhibition will focus on a number of new works that will be supplemented by complementary existing works that span over 20 years of Weir’s creative output. She represented Ireland at the 49th International Venice Biennale and has exhibited widely both nationally and internationally, and is currently Artist-in-Residence in the School Of Physics, Trinity College Dublin.

Approaches to Paper
12 November 2015–27 March 2016
This IMMA Collection exhibition, Approaches to Paper, explores the practice of celebrated Irish Modernists such as Evie Hone and Mainie Jellett to exemplary contemporary artists such as Antony Gormley, Andrew Folan and Kiki Smith.
Admission is free to all 2015 exhibitions with the exception of What We Call Love.

You are invited to experience ROADKILL 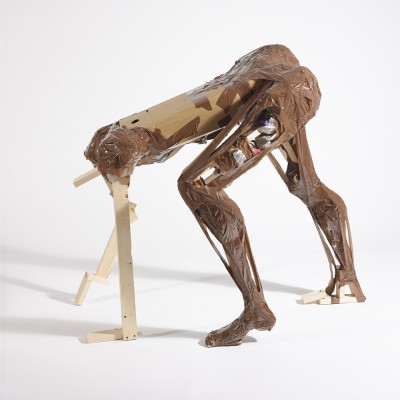 Sandra Davoren, Hybrid 1, 2014 mixed media. Image courtesy the artist. © Sandra Davoren
IMMA is hosting ROADKILL on Thu 12th February; an evening of live performance, installation, video and music by multi-disciplinary artists, programmed in parallel to the Primal Architecture exhibition. Featuring artists Jenny Brady , Sandra Davoren, Elaine Leader, Eoghan Ryan, Smilin’ Kanker and Przem SHREM Zając the night will also mark the launch of the Primal Architecture  publication. We asked  Séamus McCormack, Project Coordinator of Exhibitions at IMMA, to tell us more about this project and how it connects with the overall exhibition. Essentially a footnote to the Primal Architecture exhibition, ROADKILL presents alternative, opposing and contradictory explorations of instinctual and primal concerns. The project presents a diversification of propositions exploring themes of framing, duality, structure, sexuality and appropriation, and the artists involved employ devices such as collage, remix and disruption. Primal Architecture artist Mike Kelley had the ability to work across widespread media and disciplines, liberating and borrowing from diverse sources and reference points. A sculptor, painter, noise musician, writer and teacher, Kelley’s practice traversed, cited and footnoted. Like Kelley, the practitioners included in ROADKILL, in their various ways, offer t...
Manage Cookie Consent
By clicking “Accept Cookies”, you agree to the storing of cookies on your device to enhance site functionality and analyse site usage.
Manage options Manage services Manage vendors Read more about these purposes
Cookie Settings
{title} {title} {title}