‘Foreign Body’ by Cherry Smyth in response to Jaki Irvine

Northern Irish poet and art writer living in London.  Her first two collections were published by Lagan Press: When the Lights Go Up, 2001 and One Wanted Thing, 2006.  By Cherry Smyth
Wed Nov 30th, 2016 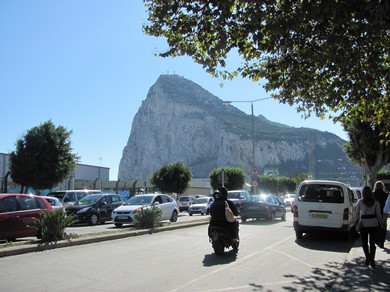 Cherry Smyth, poet, curator and art writer, is one of the collaborators in Jaki Irvine’s new work If the Ground Should Open…, a major new commission for IMMA presented on the occasion of the centenary of the historic Easter uprisings of 1916. In this blog Smyth discusses her response to Irvine’s work and presents her poem Foreign Body which is performed within the first and eponymous track of Irvine’s new work, currently at IMMA.


A one-off live performance of If the Ground Should Open…, in its entirety, takes place on Tuesday 13 December at 7pm in the atmospheric surrounds of the Great Hall at IMMA, where the footage for the original sound and video work was developed. Cherry Smyth will participate in this live performance alongside the other project performers which include Louise Phelan and Cats Irvine (vocals) ; Sarah Grimes (drums); Jane Hughes (cello); Izumi Kimura (piano); Hilary Knox (bagpipes); Liz McClaren (violin) and Aura Stone (double bass).. Book Tickets €8 euro including post performance reception.

Foreign Body – a poem by Cherry Smyth written for Jaki Irvine, If the Ground Should Open (2016)

When Jaki Irvine asked me to respond to her book Days of Surrender (Copy Press, London, 2015), two things hooked me: the notion of bystanding, inspired by those who claimed to be ‘innocent bystanders’ in Dublin in 1916 and the name Elizabeth O’Farrell, which kept ringing and echoing back as Mairéad Farrell.  Who draws the line of innocence and who chooses to cross it?  I like to think I could have been Elizabeth O’Farrell, risking gunfire in the streets, sacrificing safety and I shudder to think I could have been Mairéad Farrell, an active member of the IRA, jailed for ten years for bombing a hotel and then assassinated by the SAS.  Where does the choice lie?  And how does history choose its heroines?

I had been haunted by Mairéad Farrell’s death since 1988 and knew I could only understand her lack of choice if some part of me became her through a poem.  I wrote about this process more fully in an essay entitled Bystander.

I am interested in how art and poetry can build a space that can hold everything: the collapsed and derided financial system, the failed and deluded electoral system and the ongoing, troubled and troubling project of a united and independent Ireland.  Jaki Irvine’s If the Ground Should Open… creates this kind of space, a space we didn’t know how much we needed until it appeared, a space that has the audacity to put anomalous things together and make a moral resonance.

If the Ground Should Open… presents a big, bleak space, with a mournful coaxing of sound and women’s voices.  The traditional white space around a poem, Irvine juices with music, colours with sound that lifts my poem, Foreign Body, into a new auditory landscape.  This allows others to inhabit the world of the poem in a much fuller and more powerful way.  It is a world of deep (and deepening) frustration with how women’s power and wisdom are dulled, ditched or destroyed by patriarchal culture.

‘The mouth is engineered by gender’ writes Vahni Capildeo in her striking new collection Measures of Expatriation (Carcanet, 2016) and Irvine captures this wonderfully in the phone excerpt of a corrupt, male banker cackling with glee set against visceral female keening.

I write poetry to face the ugliness of contradictions, of moral ambiguity, to stay looking when others have turned away, to inhabit the room they want to evict us from.  Poetry can do what nothing else wants to: call to account, act as a witness.  It relieves the passivity of trauma; it can transform and heal to write what is in front of you.  You are no longer helpless, no longer a bystander.  The vision in your head is outside of you and others can enter it and be held and changed there.

Foreign Body
In 1988, a girl went to Spain.
An Irish girl.  It was March.
Some would say woman.
But she was a girl, a good girl,
to those who knew her.  Clear-eyed, pale.
The mimosa was out.  She rented
a white Ford Fiesta.  A friend gave her a gift.
Carefully wrapped.  She put it in the boot,
parked in a multi-storey carpark.
The friend’s name was Libya.
The girl was 13 in 1970.
Some say it was the platform boots.
Others that it was boots on the ground.
She couldn’t breathe.
The streets were made empty.  She couldn’t
run across her own street.  Boots on the ground.
New platform boots.  Some say it was the CS gas.
She couldn’t see across her street.
The street’s name was the Fall’s Road.
1973 and she liked disco.  The sounds
of Hot Chocolate.  The sounds of binlids
battering the tarmac.  An alerting clatter
to her friends across the street, to hide
their gifts, to move their treasure.
Some say she got in with the wrong crowd,
others that she got an education.  Everyone
with an accent was suspect and everyone
had an accent.  On the streets, a foreign body,
making the local foreign, making who you had
tea with disappear.  That’s 10,000 teacups,
never a judge, never a jury.  Making a schoolgirl
put on a black skirt, a white shirt, a black tie.
It was not a school uniform.  Taking 3000
women and kids to march into the curfew
with bread and milk to break it.
Some say she was walking down a street in Spain
that was a street in Britain.  Some said it in Spanish,
others in English.  The word for ‘prone’ in Spanish
is ‘propenso’.  It was broad daylight, with two friends.
Some said a bad lot.  Some said they had time to look,
put their hands up.  Others that the shooters kept
shooting when they were prone.
The Special Air Service does not deliver air.
Ten years in Armagh, had taught her nothing,
explained everything.  She couldn’t breathe,
wouldn’t wear the uniform.  She wrote with shit,
spoke hunger to the world’s airwaves.
Some called it a war, but she could not be called
a soldier.  Some said she was a criminal, but there
was no trial.  Some called her above the law, but
the execution lawful.  Bare-headed in the spring sun.
Bare-handed on the Spanish-British street, travelling
under a false name that the border control already knew.
A foreign body on a Gibraltar avenue.
i.m. Mairéad Farrell, 1957-1988 (aged 31) 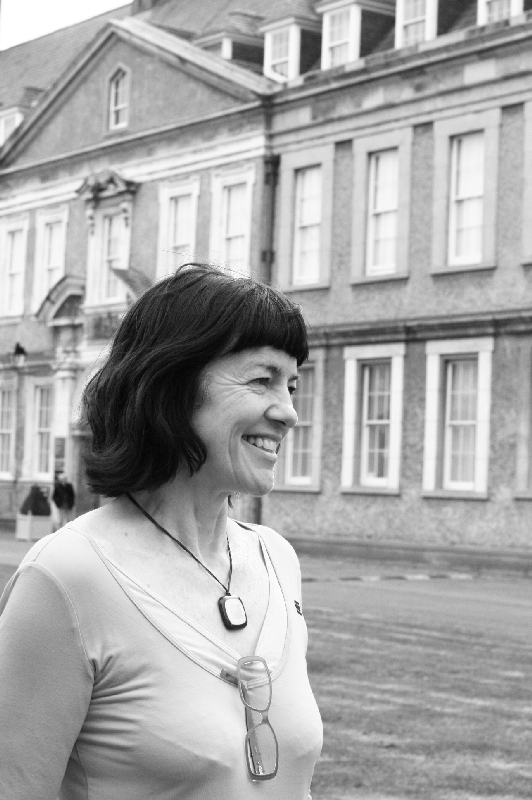 Cherry Smyth is a Northern Irish poet and art writer, living in London.  Her first two collections were published by Lagan Press: When the Lights Go Up, 2001 and One Wanted Thing, 2006.  Her third collection Test, Orange, appeared with Pindrop Press, 2012.  Her debut novel, Hold Still, Holland Park Press  came out in 2015. She writes regularly about art for Art Monthly and has written catalogue essays for Elizabeth Magill, Siobhan Hapaska, Brigit McLeer and Orla Barry, among others.  The hallmarks of her work are ‘precision, linguistic inventiveness and joy’, The Irish Times.

If the Ground Should Open… by Jaki Irvine continues at IMMA in the Courtyard Galleries until 15 January 2017. Foreign Bodies is one of eleven tracks which make up the work. Admission to the exhibition is free.

A one-off live performance of the work takes place on Tuesday 13 December at 7pm,. Tickets €8, which includes booking fee and beverages after the performance. Book here.
Watch Jaki Irvine talk about her work in this video introduction to her exhibition.

Taking part in the Food Power School at A Fair Land 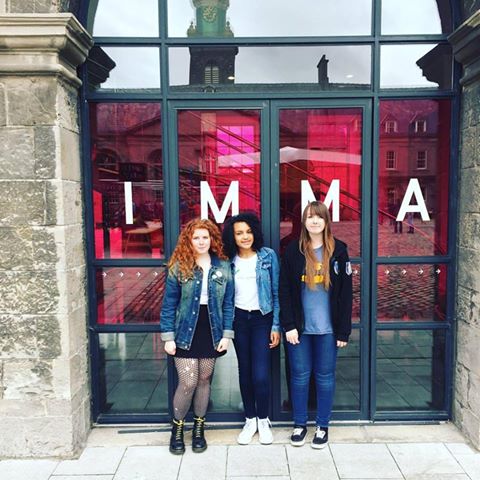 Leah Whelan, Sophianne Lubasa and Béibhinn O’Hair, at the Food Power School as part of A Fair Land. IMMA
A Food Power School took place at IMMA over three weeks as part of A Fair Land to re-discover the power in domestic life. In this article Sophianne Lubasa tells us about her experience at the school where she learned about the harvesting, preparing and cooking of courgettes from the crop in the courtyard to the lunch diners at the OR/AND table. All activities in the Food School were closely guided and mentored by the Fair Land Team making the food. Pictured above Sophianne tells about the school in her own words. I was lucky enough to take part in ‘A Fair Land’ at IMMA recently. I thoroughly enjoyed the four days and was delighted to write this blog detailing my experience when I was asked to! The first day: On the first day the four of us met Mark Maguire from IMMA's Engagement and Learning Team in the reception at IMMA. He spoke to us about IMMA and explained we were going to participate in the food school for the four days. He also explained about the other workshops taking place. Mark then brought us to meet Adam Sutherland, Grizedale Art’s director, who was the coordinator for the day. Adam showed us around and gave us a real feel for what A Fair Land was all about. IMMA’S courtyard was transformed into a village where visitors were able to partake in making apron...
Manage Cookie Consent
By clicking “Accept Cookies”, you agree to the storing of cookies on your device to enhance site functionality and analyse site usage.
Manage options Manage services Manage vendors Read more about these purposes
Cookie Settings
{title} {title} {title}