Ronan McCrea’s ‘Medium (Corporate Entities)’ was originally commissioned on the occasion of ‘10,000 to 50’, an exhibition celebrating the twentieth anniversary of Business to Arts, which took place at IMMA prior to the 2008 financial crisis. In 2013, ‘Medium (Corporate Entities)’ was purchased for the IMMA Collection. Here, McCrea writes on the history of the project and its latest iteration, currently on show as part of the ‘Fragments’ exhibition until July 26th.
Medium (Corporate Entities) is a photographic response I made to eight corporate collections sited at A&L Goodbody, Allianz, Dublin Airport Authority, Dublin Docklands Development Authority, Harcourt Developments, Irish Life and Permanent, McCann Fitzgerald and RTÉ, resulting in 81 images that comprise the artwork. The first iteration of the work was shown as part of the 10,000 to 50 exhibition as a silent slide projection; each image remained clearly legible for 11 second intervals before being replaced with the next and an edited selection of the images appeared in gloss-print in the 10,000 to 50 exhibition catalogue. 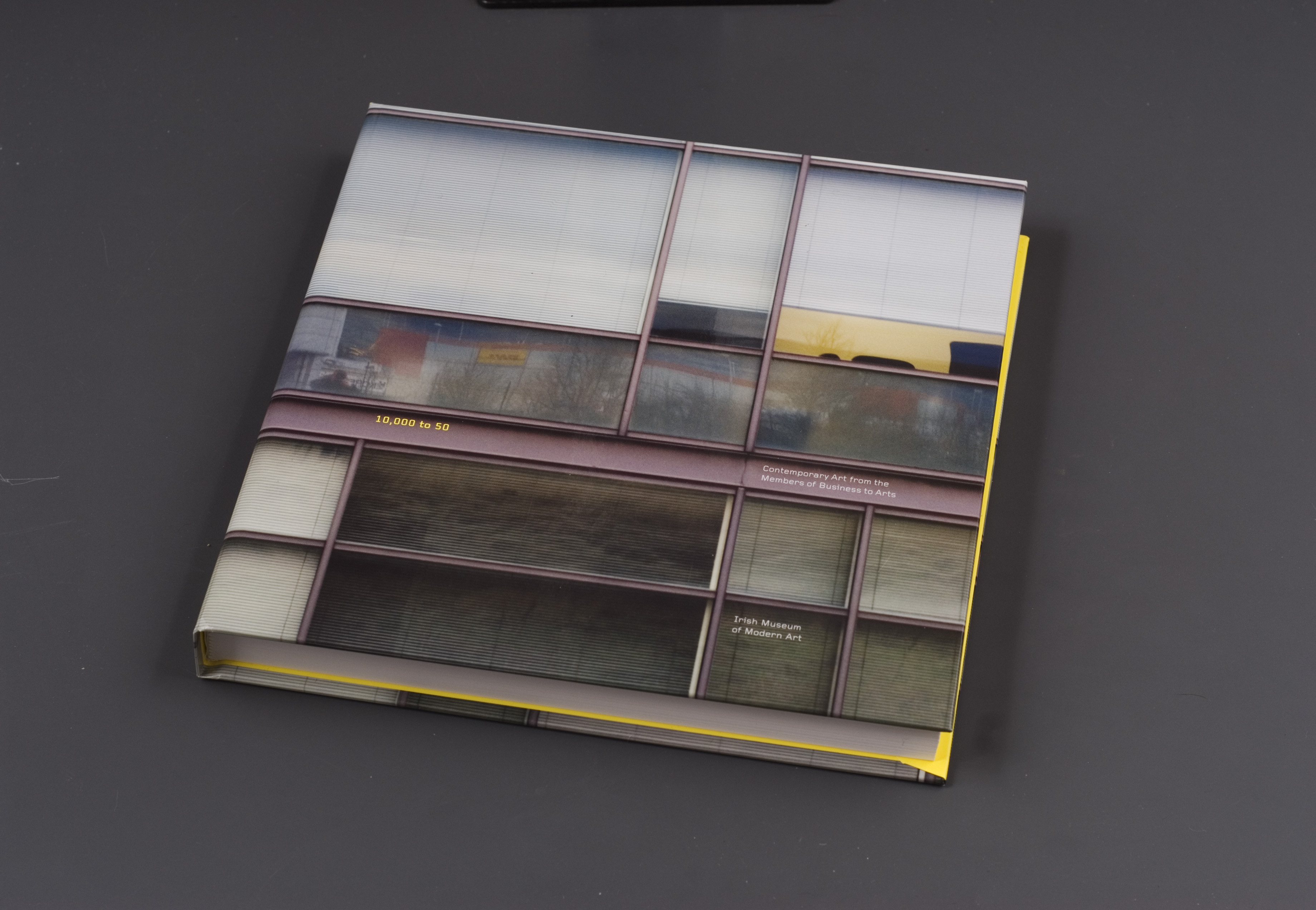 The work started life as a straight-forward documentation assignment to photograph a number of artworks in corporate art collections ‘in-situ.’  These images were intended as contextual visual material for the 10,000 to 50 exhibition.  Working in collaboration with IMMA curators Christina Kennedy and Marguerite O’Molloy, and utilising research conducted by independent curator Jennie Haughton, I developed this starting point into an artist’s project that expanded on the original intention.

This impetus for this approach followed from the fact that it is virtually impossible to achieve an unrestricted view of artworks – foliage, security cameras, potted plants, rubbish, posters, people, signage, fire cylinders, various architectural details and tight angles impede any clear view of the artwork. This offers some very unsatisfactory installation photographs in the traditional sense, but opens out onto images of social conditions in which the artworks exist.  Indeed the various sites constitute an array of architectural, design and social situations, which I found fascinating.

Another interesting aspect of this project for me was the shift that occurred in the re-casting of my role from jobbing photographer to artist.  As an artist, you get used to performing many roles to make a living – in my case this has included museum technician, documentary photographer, lecturer and curator, to name a few.  So shifting between roles in this project complicated in an interesting way the etiquette and process of gaining permission, access and editorial control between myself, the companies, the museum, Business to Arts and the artists whose work featured in the images.  The project involved a series of negotiations, which often hinged on anxieties about what the actual subject-matter of the images might be, sensitivities over corporate public relations and how the images might be interpreted and what their function might be – both generally and in the context of the 10,000 to 50 exhibition.

When IMMA later acquired the work in 2013, I had to think how the piece would operate outside its original and very particular context. I decided that the manifestation of the work would be quite variable and open. In this way, the work can be thought of less as a series of fixed format photographs or art-objects with precise material conditions and dimensions, and more an active archive of images that can be re-configured and used to suit any particular context. For instance, depending on the event or exhibition, the images may be made manifest in a 35mm slide projection installation, digital projection, photographic prints of various sizes, posters, as well as the myriad possibilities offered by the printed page – artist’s book, inserts, magazines, etc.

It is intended that each iteration of Medium (Corporate Entities) involve a discussion between the artist and IMMA, the curators, borrowers or other involved parties as to how to manifest the work in any particular context. Over time, it is hoped the artwork accrue a number of different formats, options and uses that can be extended and developed into the future.

For the exhibition of the work in the current Fragments exhibition, I decided to re-edit the work as a 35mm slide projection with a new soundtrack. Walter Benjamin’s ideas of translation act as a reference point for the curators of the Fragments exhibition, but Benjamin is also important in my thinking about Medium (Corporate Entities) when, in his 1931 essay “A Little History of Photography”, he asks “Will not the caption become the most important part of the photograph?” In this sense, the third iteration of the work is a process of re-contextualising and re-captioning.

To do this, I appropriated the essays and foreword texts from the 10,000 to 50 catalogue and created a new “caption-script” inspired by William Burroughs – cut-up method.  This involved photocopying and enlargin the texts, cutting out phrases and words and re-assembling them in random order.

I recorded this script as a voice-over, adding some recordings I made of footsteps to ‘spatialise’ the soundtrack and to give continuity over the auditory fragments. I made 35mm slide copies of the images and edited them with this new soundtrack.  The images are re-mixed as a kind of rolling series of dissolves and superimpositions that is possible by using three synchronised slide projectors, creating a visually rich dream-like experience in the enclosed space of the installation. 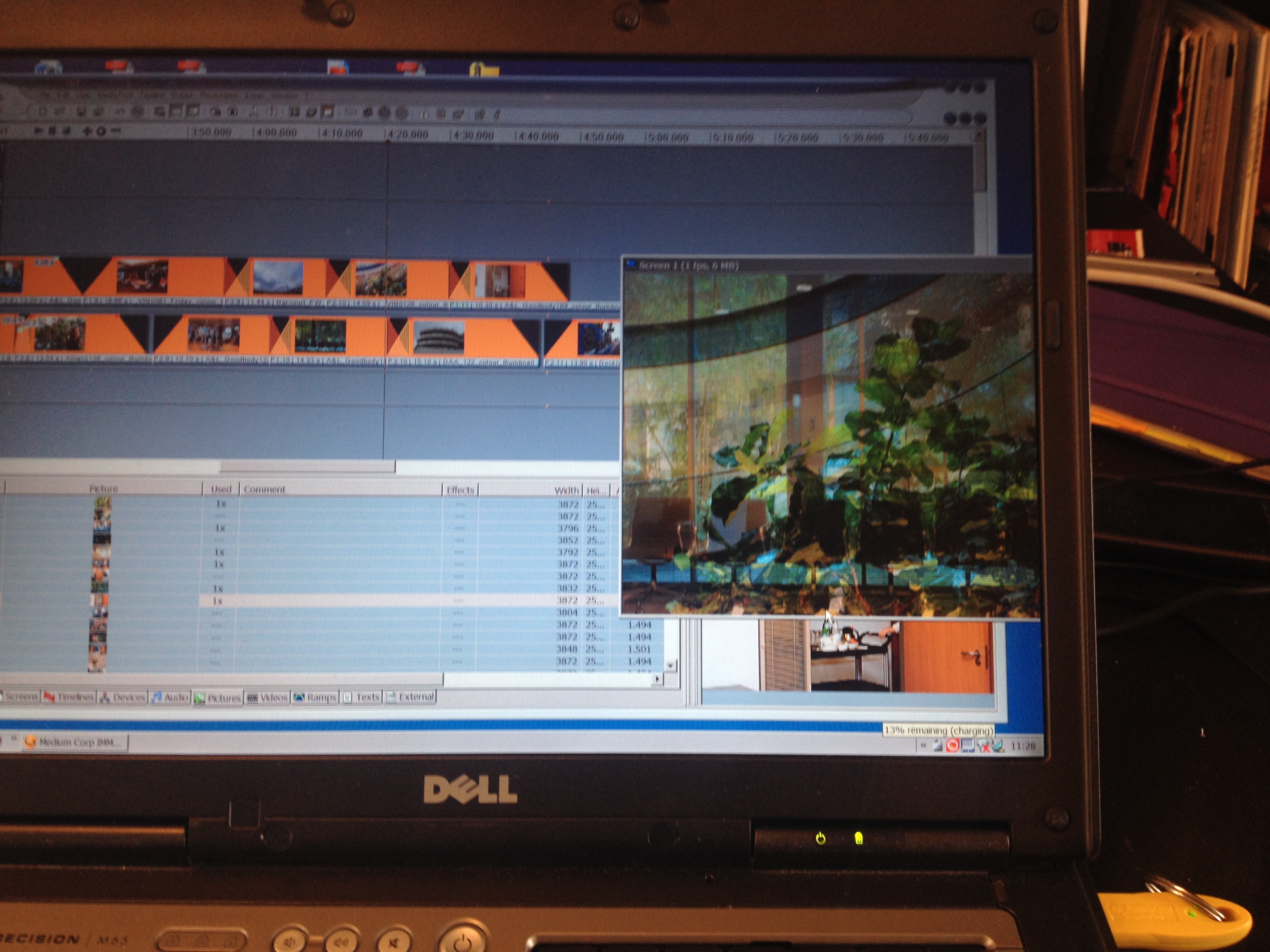 I worked with the IMMA curators and technical team to design and build an enclosed installation space in one of the East Wing rooms to project the images diagonally across the space. This involved building a plywood wall at an angle, on which the projection screen was fixed. This kind of provisional structure plays off the many images of architectural space and structures, but also references an earlier work of mine, Appropriate Measures II, which took the form of a hoarding in the gallery space. http://www.pauloneill.org.uk/curatorial/projects/la-la-land/
For “Fragments”, this structure created a curious dead-end behind the wall, which is accessible to visitors, and onto which I pasted-up the leftover photocopies of the publication I used when making the script, creating another counter-point within the work. 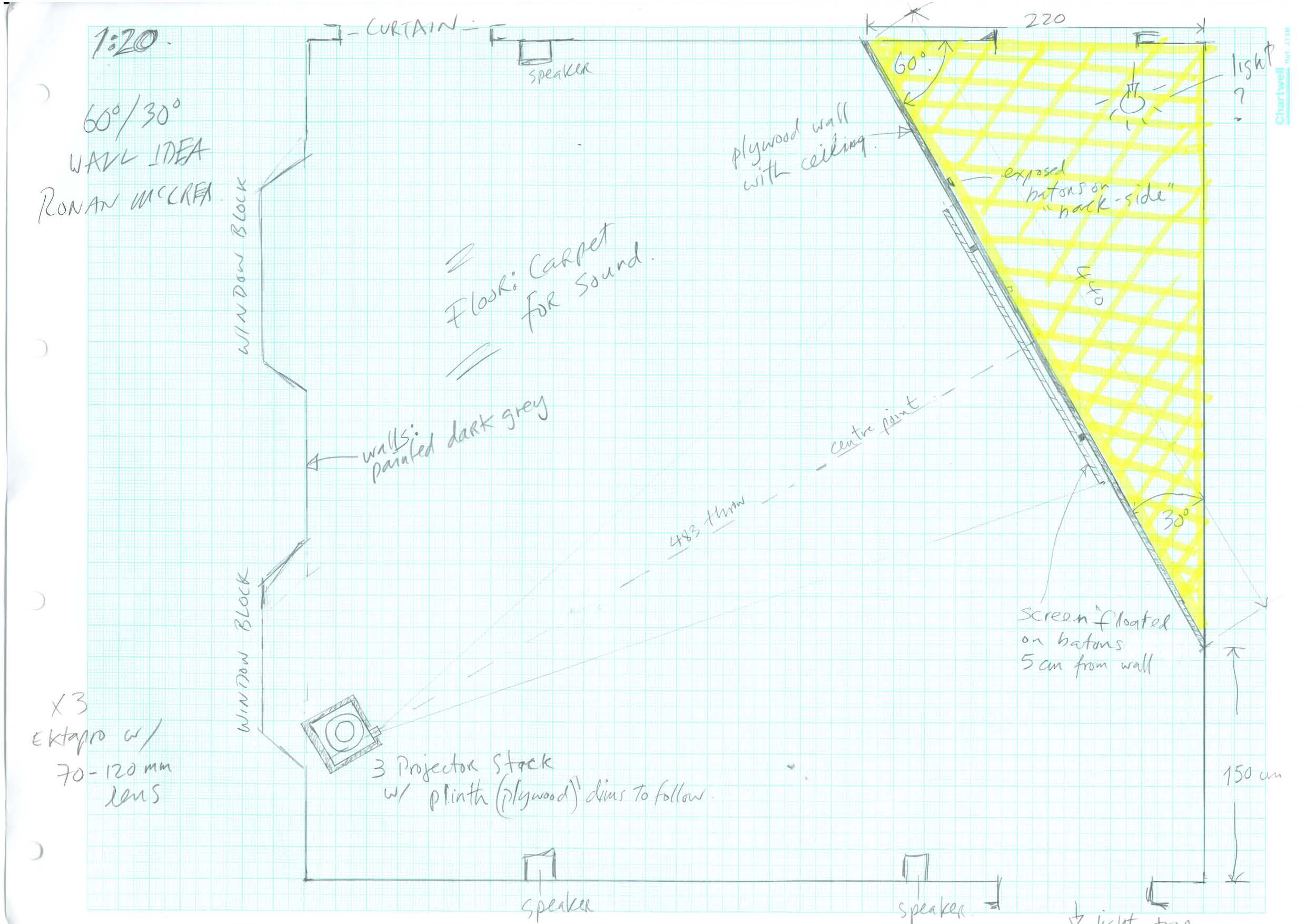 Creating this dream-like quality was, in a way, a response to the original context of the 10,000 to 50 exhibition, which opened just a few months before the financial crash of 2008 (Anglo Irish Bank was one of the exhibition sponsors, and the publication includes a foreword by its then CEO David Drumm.)  The idea of pre- and post-2008 as occupying different paradigms has a hallucinatory aspect to it. 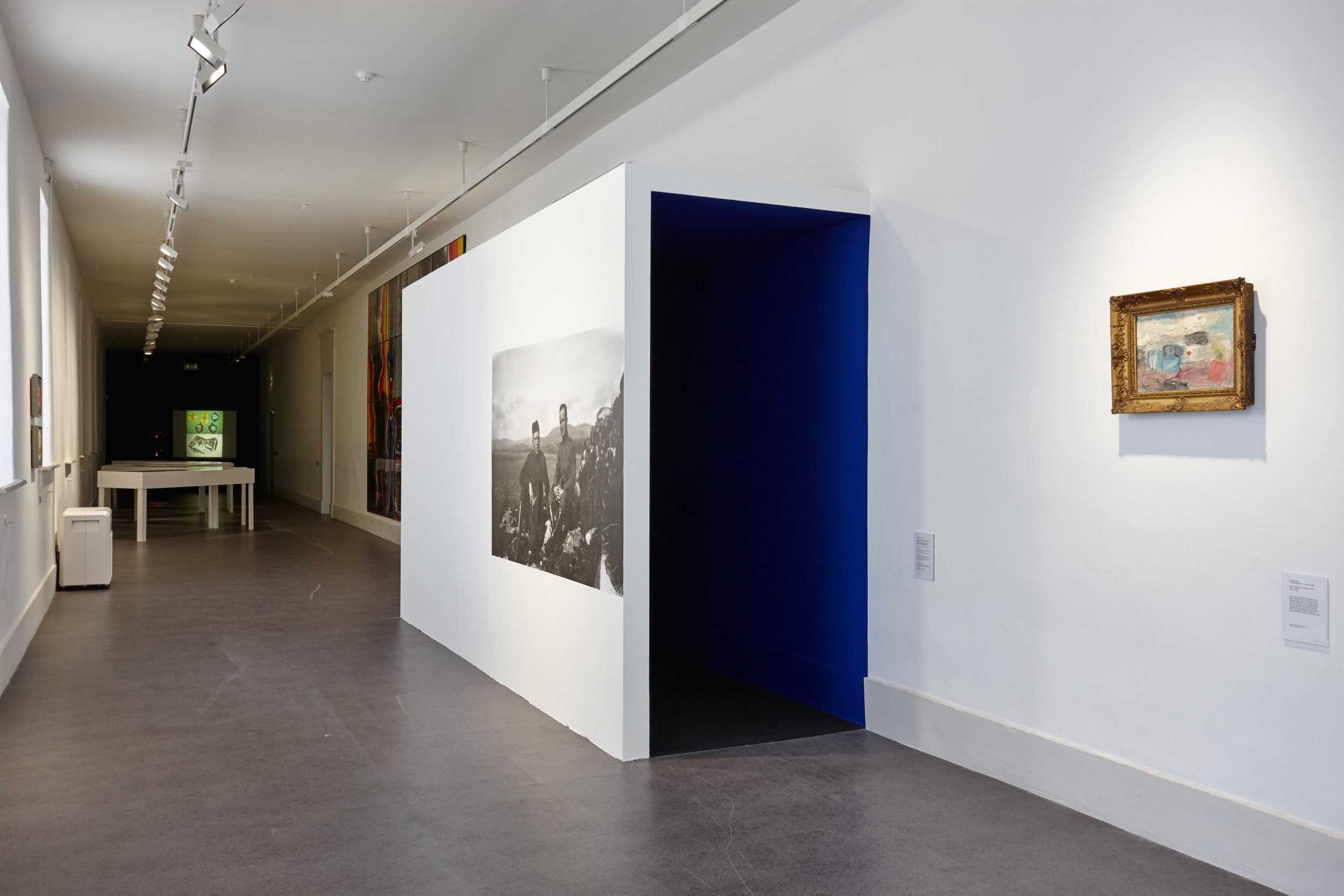 As the IMMA Collection show 'Fragments' enters its final weeks, artist Alan Phelan reflects on his involvement in the layout of the exhibition. Fragments between subjects, objects, histories and house plants I became involved in Fragments after the Collections curators Christina Kennedy and Marguerite O’Molloy came to my place to discuss the installation arrangements for my film Include Me Out of the partisans manifesto. We discussed possible rooms, light-lock designs, adjacent works, exhibition flow and sections. In the subsequent weeks Marguerite asked me to get a little more involved, as I seemed a little too keen to know what was where in the show. I was asking too many questions. Marguerite had made an initial selection of about 37 works that were to be hung in the main corridor space gallery. These works mainly came from the Gordon Lambert Collection and were chosen in response to the Gerda Frömel retrospective and Karla Black exhibitions, as many were from a similar era or style as Frömel, and others dealt with materiality linking to Karla Black. Originally many of these were hung in Lambert’s home, and in the early days of IMMA Marguerite had visited several times and remembered how they were positioned, but moreover the special and sometimes unusual context...
Manage Cookie Consent
By clicking “Accept Cookies”, you agree to the storing of cookies on your device to enhance site functionality and analyse site usage.
Manage options Manage services Manage vendors Read more about these purposes
Cookie Settings
{title} {title} {title}