Senior Curator and Head of Engagement & Learning Programmes at IMMA since its opening in 1991 where she adopted a pioneering approach to breaking new ground in creating people-centred access programmes. She has built trust with partners from a broad cross section of the local community to national and international collaborations exploring how art and artists can work with diverse communities. IMMA has partnered with many international collaborations including Socrates and Grundtvig Learning Programmes and MoMA in NYC. Helen was a Fulbright Scholar at MoMA in 2019/ 2020. Helen has published articles on her field of research across art education, museum studies and artist/educator collaborations. By Helen O'Donoghue
Thu May 20th, 2021 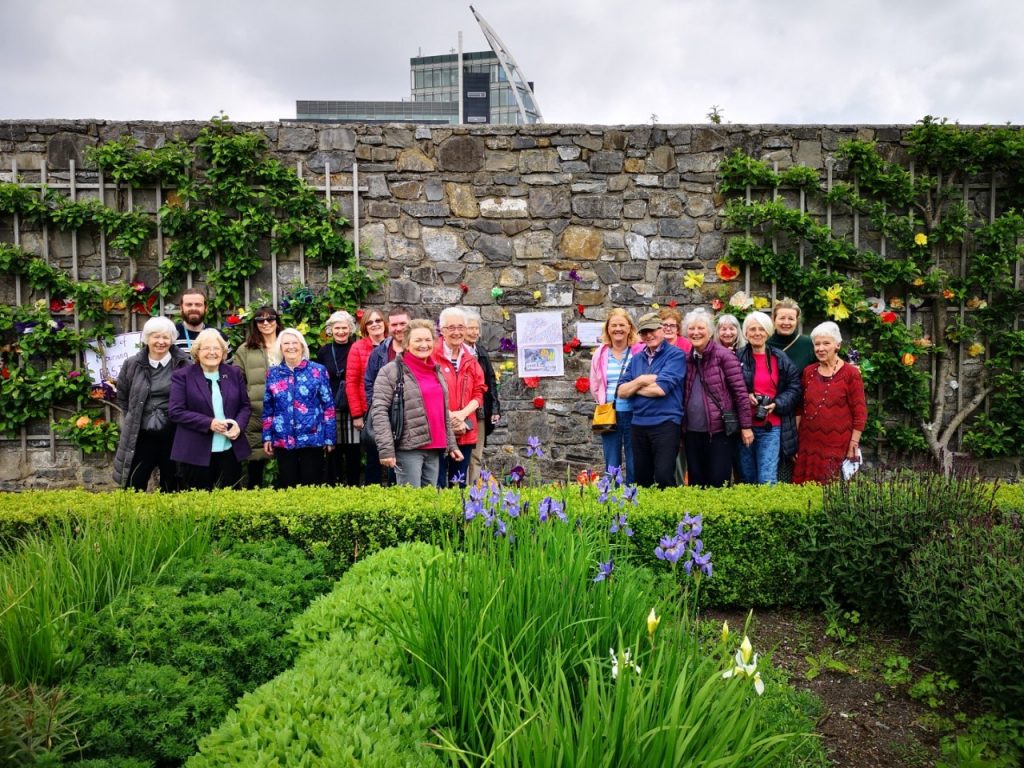 As part of IMMA’s 30th Birthday celebrations Helen O’Donoghue, IMMA’s Head of Engagement & Learning, shares with us the story of Studio 10, IMMA’s longest running Engagement & Learning Programme which started in 1991. Studio 10 has had many iterations over it’s 30 year history with many partnerships and collaborations and has become a valuable part of the Museums story. Every week, from September to June, this eclectic group of individuals gather at 10am in Studio 10 to share in their passion for art and  art making.

“The Irish Museum of Modern Art was practicing lifelong learning years before politicians and commentators discovered it. Five years ago a group of older people from Inchicore, who had come to the Museum ‘to learn to draw’, produced one of the most moving exhibitions I have ever seen in an art gallery, the magical ‘Ribbons of Life’ show”

Studio 10 grew out of a long-term outreach programme with the St Michael’s Parish Active Retirement Association, in Inchicore, Dublin 8, that was initiated in 1991 and was developed into an open studio model for adults more generally in the mid-2000s. This year IMMA celebrates its 30th birthday, as does this evolving programme.

In early 1991, before the museum opened to the public a close working relationship had been established with this group of older residents in the nearby area of Inchicore. This was in keeping with the museum’s policy of involving the local community in the life and work of the museum. It also recognised the potential and role of older people in contemporary visual culture. The painting group of the Retirement Association exhibited work as part of the Museum’s inaugural exhibition Inheritance and Transformation.  A partnership was then established with the national agency Age and Opportunity which provided support and advice for the work with older adults.

The first decade saw a vibrant programme whereby the group worked with several artists who facilitated art making in the studios, linked with other groups in the south inner city and acted as key workers in IMMA’s National Programme. They also piloted a Curatorial project ‘Come to the Edge…’ and participated in a four-year action research project in a European funded Socrates programme exploring peer to peer learning in museums.

The programme has developed incrementally over the past three decades into the current Art & Ageing programme which caters for Adults including those living with Dementia and Alzheimer’s through online and onsite programmes and continues to form a key part of IMMA’s Engagement & Learning programmes. IMMA was an inaugural founder of the national Bealtaine festival which is programmed by Age & Opportunity and has worked nationally and internationally with them and other key stakeholders including the Alzheimer’s Society of Ireland and the Butler Gallery to develop the Azure programme and more recently the Mercer’s Institute for Successful Ageing (MISA) at St James’ Hospital/Trinity College. This year Creative Ireland supported a pilot online programme to support people who have had to cocoon throughout the Covid-19 pandemic.

The objectives of this programme are to ensure that the museum is catering for as wide an audience as possible and to encourage involvement in the museum by identifying and responding to peoples’ needs; to breakdown existing barriers to the involvement of older people in contemporary visual arts, by involving them in as many ways as possible including the influencing of museum policy.

The initial programme was evaluated in 1999 by Dr Ted Fleming and Anne Gallagher of Maynooth University as part of an EU Socrates funded programme and marked the United Nations International Year of Older people that year.

“Issues which are at the core of adult education are seen here in practice in IMMA. Adult education is about forging connections and seeing more than two polarities: it is about moving away from dualistic thinking to more connected and holistic modes of learning and action. The programme is a powerful introduction to new ways of thinking, perceiving, acting and interacting. It has important implications for arts in the community”

From the publication Even her nudes were lovely: Towards connected self-reliance at the Irish Museum of Modern Art, 1999

The current Studio 10 programme evolved out of a series of open studio programme initiatives in the mid-2000s. A series of drawing workshops titled from Charcoal to Chocolate inspired by Vik Munoz’s exhibition in 2004, marked that years’ Bealtaine festival and broadened our participation beyond the inaugural group.

The IMMA gallery staff, the Visitor Engagement Team (VET), provide a range of experiences for the public, engaging visitors through informal discussion about the artwork on view, designing formal tours for school and other groups, and on a range of programmes for children’s’, community and adult groups. The programme has continued and grown to include adults of all ages from a broad social and geographic demographic who come together every Friday morning from September to June, at IMMA.

Every week this community of learners gathers at 10am in Studio 10 at IMMA and work together to engage with ideas and art making techniques.

The sessions are led by the VET who share knowledge and skills across a wide variety of art practices that are centered on work that they explore in exhibitions in IMMA’s temporary exhibition programmes. Through this programme which is run in a series of three consecutive sessions over as many weeks, participants can deeply immerse themselves in exploring themes and learn about the ideas behind the specific artworks or artists that they focus on and subsequently draw from this and their own life experience to make artwork themselves in the studios.

The group is now made up of a diverse range of adults who have joined the group over the past eighteen years. The community that gathers at IMMA on Fridays is an eclectic group of individuals, who all share a passion for art and art making and have their individual reasons for being involved. Benefits that have been described to us by participants attending the programme include – having fun and enjoyment… a sense of connectedness… a community of like-minded people who share similar interests… providing the opportunity to engage with challenging work in the galleries… the continually learning new skills… the opportunity to meet and to work with people of different ages…  to work with and meet artists.

The VET rotate their facilitation and run the programmes in a series of three weekly sessions to focus on a particular artwork, or exhibition. The team are made up of talented artists and educators all of whom share the Museum’s belief in creating access to art for everyone irrespective of prior knowledge or experience. The invitation is open to anyone who is interested in exploring art and meeting others who share the same interest.

We have just launched Tracing Memories a series of six themed, documentary-style podcasts, this is a valuable audio archive collated over the past two years and captures a moment in time through first person accounts of their engagement with IMMA and its impact on the participants. The first episode Colours of Childhood is available to listen to here.

Studio 10 is currently taking place online three Fridays per month. For additional information on Studio 10 or any of our Art & Ageing programmes please contact Catherine Abbott at [email protected] 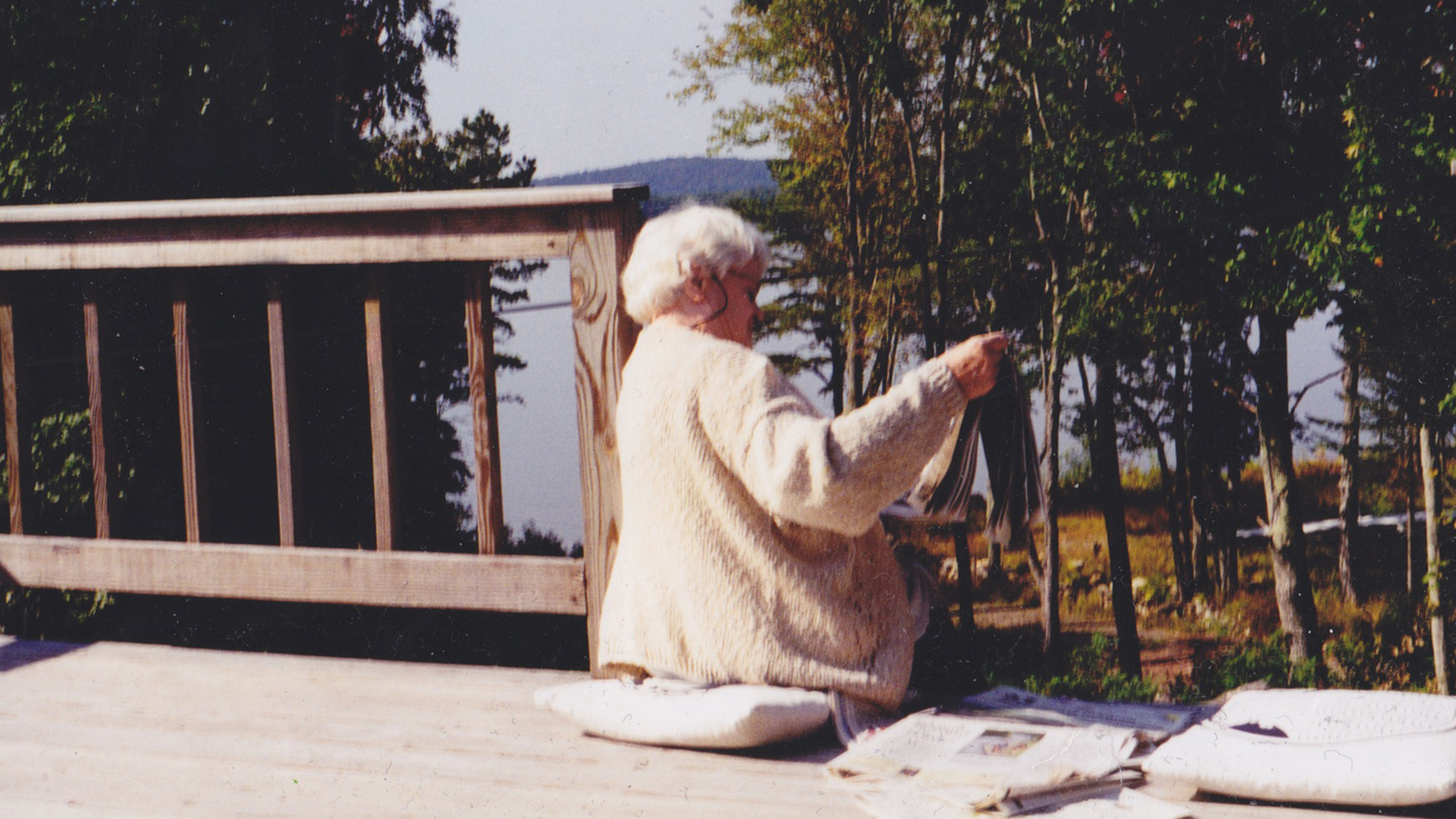 Mum on her deck. SLR photograph by Beth O'Halloran (2004)
This essay, The Last Ferry, was conceived for The Maternal Gaze series and hinges on the ways Beth O’Halloran’s mother’s ethics and love of nature shaped her practice. The personal essay and accompanying images focus on a road trip O’Halloran shared with her mother, Ruth Libbey O’Halloran. They travelled from Ruth’s native Maine to the island of Nova Scotia. It is a meditation on maternal love, loss and the transference of enduring codes for living.  ....................................................................................... I’m awake before you. Is that a first? I creep out of the motel room as quietly as I can, to feel the air and look through a lens – to gain a little distance. The lake is hidden in a thick, blue-purple fog. I can’t tell where the air stops and the water begins. It is cool and damp – Canadian cold meeting the last warmth of a New England summer. I am standing on a small wooden dock, wrapped in mist, wishing I had brought the cardigan you gave me. There is a tree to my right – the only solid thing – but even that is slipping from view. The camera makes a click so loud, ducks swim away. [caption id="attachment_62140" align="alignnone" width="980"] Missed. SLR photograph by Beth O'Halloran (2005)[/caption] These trees, the birdsong I c...
Manage Cookie Consent
By clicking “Accept Cookies”, you agree to the storing of cookies on your device to enhance site functionality and analyse site usage.
Manage options Manage services Manage vendors Read more about these purposes
Cookie Settings
{title} {title} {title}