The Accordian Player is a work by William Conor. It is part of the IMMA Permanent Collection.

Northern Irish artist William Conor studied at the Government School of Design in Belfast. He went on to work as a commercial artist and during the First World War he was commissioned by the British government to complete portraits of soldiers and munitions workers. Working primarily in watercolour and wax crayon, Conor’s predominant subjects were the working classes in Ulster. He exhibited regularly at the Royal Academy in London and the RHA in Dublin. He was elected a member of the RHA in 1946. His work is represented in major public collections including the National Gallery of Ireland; the Linen Hall Library, Belfast, and the Ulster Museum, Belfast. View Artist 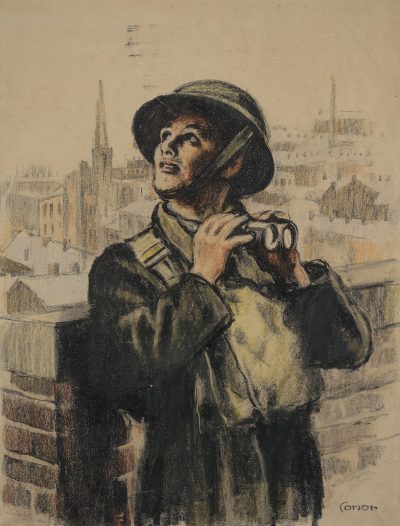 And Wet a Cup of Tea William Conor