Skip to navigation Skip to content
X
John Ahearn, b.1951

The process of making the series of portrait busts that go to make up ‘St.Francis Street Boys’, 1994 involved a lengthy co-operation between artist and sitters – the development of a trusting relationship between them was central to the success of that process. The boys had to submit to having their heads and shoulders encased in quick-drying latex rubber to make the moulds from which the final plaster casts were made. The resulting portrait group provides a dynamic record of the class of 1994, while it also documents a very real exchange between the boys, the artist and the Museum.

The work is jointly owned by the boys’ school and the Museum and is housed with the Museum’s Collection or at St. Francis Street C.B.S..

Born in New York, John Ahearn works with community groups whose access to fine art and museum culture has been limited. During the 1980s and 1990s, Ahearn executed outdoor murals in New York and collaborated on public projects in North America and Europe. He participated in the Artist’s Residency Programme at IMMA in 1994. From 2000 he has worked in Taiwan and Brazil. View Artist 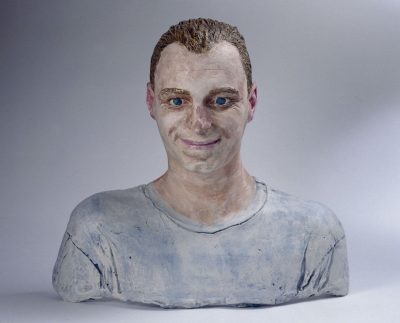