Skip to navigation Skip to content
X
Albert Irvin, b.1922

“I painted ‘Soho’ during the summer of 1994. I started, as I usually do, with what Turner referred to as ‘colour beginnings’. The mood and character was set by painting the whole canvas with dark blues, predominantly ultramarine. This was drawn into freely, wet into wet, with green, crimson, darker and lighter blues and white. I then use sheets of painted paper to develop the space of the painting – like Matisse did with his collages. When I feel I’ve located a group of colours, I take a polaroid, remove the paper and carry out the painting.

My paintings are not depictive; I consider them to be about the world rather than of if. But some features have an affinity with imagery I can identify. For example the tracery of white lines in ‘Soho’ has an association with aeroplane trails. A significant icon of our time is the sky slashed by aircraft trails. I’m very aware of how well they were used in Paul Nash’s great painting ‘The Battle of Britain’ in which the conflict is revealed by a skein of trails.

The source of the title ‘Soho’ is a street in London. I use the names of streets as titles for identification. The streets are symbols for me of movement about the world. When I employ a street name as a title, I like it to reverberate with implication. ‘Soho’ has many long term implications for me, with friends and places.”*

British painter Albert Irvin studied art at Goldsmith’s College, London. He later returned to Goldsmiths in 1962 where he taught art for over twenty years. Irvin is best known for his exuberant paintings, watercolours, screenprints and gouaches. His art tends to focus on capturing and exploring the experience of being in the world. Irvin was elected a member of the Royal Academy in 1998 and appointed Officer of the Order of the British Empire (OBE) in 2013. View Artist 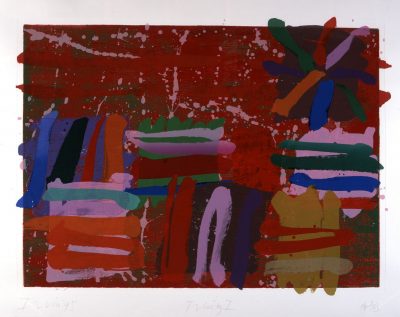 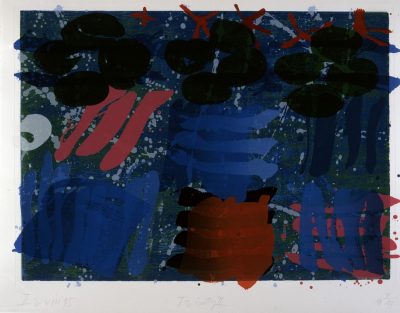