Michael Kane has been actively engaged in the politics of art-practice in Ireland since the 1960s. A member of the Independent Artists and founder of Project 67 (which later became the Project Arts Centre) he has been an uncompromising critic of injustice, inequality and ineptitude. He published and edited ‘Structure’ -a socio-political journal of art and thought in the 1970s, while continuing to promote opportunities for artists, and to create a large output of prints and paintings that can be characterized by their energy and the anger they so clearly express. The new urban realities that emerged in Ireland since the 1950s energized him, but recently he has returned to his own rural background for inspiration. He has remained steadfastly and often fiercely figurative, creating archetypes of contemporary Ireland such as ‘Ringsend Man’.
A retrospective exhibition of Kane’s work was held at the RHA in 1995 and a solo exhibition, ‘Where the Poet has been’ was held at IMMA in the same year.

Irish artist Michael Kane studied at the National College of Art and Design, Dublin. He has exhibited his figurative paintings and prints in Ireland and Britain since the 1960s. Kane was a member of the Independent Artists, a founder of the Project Arts Centre and a founder and editor of the art journal 'Structure'. He is an elected member of Aosdána. Major exhibitions of his work were held at the RHA and IMMA in 1995. View Artist 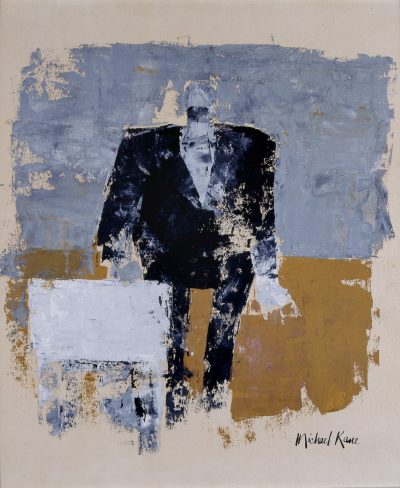