The Mythical Mare (1978) was made as a votive offering to the horse goddess Epona and was first exhibited in a solo show titled Epona in the Project Arts Centre, Dublin in 1980. It was also shown in the same year in the Institute of Contemporary Arts (ICA), London. O’Sullivan uses a variety of materials in his work and does not regard divisions between painting, drawing and sculpture as clear-cut. His subject matter is frequently derived from ancient Celtic mythological sources brought up to date by references to contemporary events. The image of the horse is an important source of inspiration for him, its role in mythology, folklore, history and Irish culture providing the artist with a range of interesting associations and symbolic references. When speaking of his work he says: “I’ve used literary devices, literary ideas and concepts as starting points….., its partly because ideas are put down so succinctly in literature.”*

Michael O'Sullivan was born in Dublin in 1945. In 1968 he received a Diploma in Sculpture from the National College of Art and Design (NCAD), Dublin. He travelled on a Taylor study scholarship to Amsterdam and the Vassos Kenellos Studio, Athens in 1969. O'Sullivan began lecturing at NCAD in 1972. Influenced by the writings of James Joyce he participated in the Ulysses Project at the Douglas Hyde Gallery, Trinity College, Dublin in 1982. He took early retirement from his post as Lecturer in Sculpture in NCAD in September 2007. View Artist 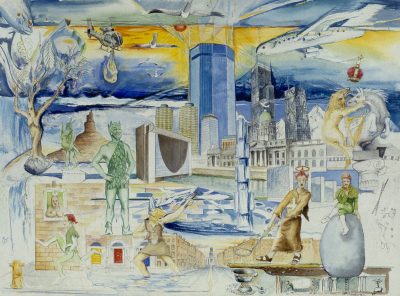