‘In Two Minds’ had a number of iterations since its genesis in 1978 when the artist was 27. The concept is of the artist having a spirited conversation with himself by way of video installation – a pioneering use of the medium at that time.

The work premiered in 1978 at the Serpentine Gallery, London. Since then there have been a number of re-engagement by the artist with his young self when on each occasion he brings himself at that point of his career and accumulated experience into the exchange. It is not an old work – rather a re-entering of a room – a re-engagement. His most recent iteration was at IMMA in 2014 in the context of the exhibition ‘Primal Architecture’ and that is the work that we are concerned with here

There is a dynamic in this work between celebration and chaos, that is captured though the duality of perspective of time and of place. It becomes something else over time – revisiting always reveal something new.

It is a work that uses the self but is not specifically about the artist – rather it considers what the self is.

In 2009 ‘In Two Minds’ has been exhibited in group shows at San Francisco MOMA; MOMA Vienna and at Tate Britain and in 2012 at ICA London.

Kevin Atherton is an artist who works with performance and new media in sculptural contexts. A fine art educator, his is a time-based practice with an ongoing interest in the relationship between the real and the fictional. Since 1980s he has created many large scale public sculptural commissions. He was Head of the Department of Postgraduate Pathways in the Faculty of Fine Art in NCAD, Dublin and as such has influenced a whole generation of young artists. View Artist 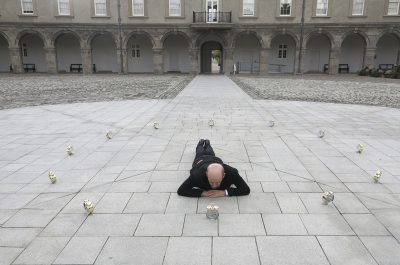