This work, first shown at IMMA in 1992, utilises the unorthodox art material of motor grease to question the aesthetic status quo concerning art, and how it is exhibited in the museum context. These concerns have informed part of Atkinson’s role as a founder member of Art and Language, a group dedicated to questioning concepts of art which were seminal to the emergence of Conceptual art in Britain in the 1960s and 1970s. Although Atkinson left the group in 1974, the Greaser works represent a further development of the concern of expanding the borders of art by creating objects that challenge the borderline between painting and sculpture.
“Grease generates quite a lot of decorative and extraneous incident. It seems to be physically situated across the border of two and three dimensions. An incident in extremis (especially in heat) would be the grease literally falling out of the painting into the world of the gallery, museum, studio etc.”*

A founder-member of the group Fine-Artz (1963), and the influential Art & Language (1968-74), English artist Terry Atkinson began his career producing conceptual collaborative works. Post 1975, he went on to exhibit independently. Nominated for the Turner Prize in 1985, Atkinson had a solo exhibition at IMMA in 1993. He teaches art at the University of Leeds. View Artist 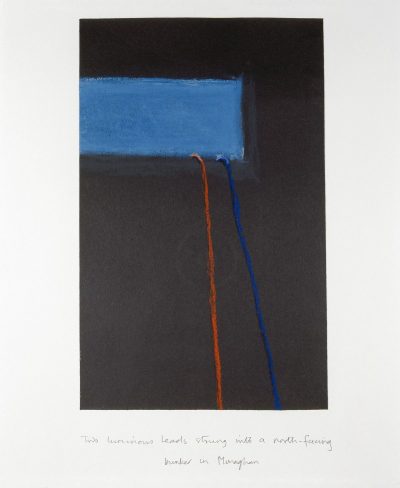 A miniature wheelbarrow bomb disposal robot guided onto a makeshift altar suspected of being booby trapped in a bunker in Armagh. Terry Atkinson 1985 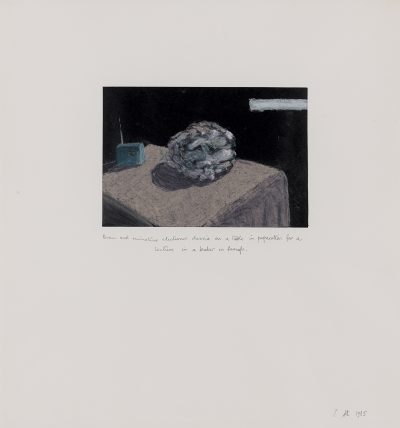 Brain and miniature electronic device on a table in preparation for a lecture in a bunker in Armagh. Terry Atkinson 1985 Pastel drawing of a view from a north facing bunker-slit looking out into South Armagh, made by a returning active service member of the Provisional Irish Republician Army, who learned his […] Terry Atkinson 1985 Mould for the bottom set of false teeth on a glass shelf in a bunker in Armagh. Through the slit three British Helicopters going in. Terry Atkinson 1984

Daughter, after having returned from an armed mission, being greeted by her mother near a Christmas wreath, in a bunker in Armagh Terry Atkinson