Dorothy Cross’s fascination with the sea is evident in ‘Ghost Ship’. In 1999 Cross was the winner of the Nissan Art Prize for a temporary public sculpture in Dublin, a joint venture between the Irish Museum of Modern Art and Nissan Ireland. ‘Ghost Ship’ is Dorothy Cross’s personal homage to lightships, which were once a familiar sight around the Irish coast. In their heyday there were twelve lightships used to mark reefs or other dangers in the open sea, the names of which were painted in large white lettering on the red ships. These engineless ships were towed into position, anchored in place and crewed by the lightshipmen who served on board for up to six weeks. Cross secured a decommissioned lightship, the 140 ft long Albatross, which she covered with phosphorescent paint and moored in Scotsman’s Bay in Dun Laoghaire from 3-21 February 1999, creating a magical ghostly presence glowing in the dark out at sea. At regular intervals the phosphorescent paint slowly faded and was then re-charged using UV lights.

While this was a temporary, site-specific piece, Cross also made a film of ‘Ghost Ship’ as it appeared in Scotsman’s Bay. IMMA acquired this documentation which is exhibited alongside two scale models of the Albatross lightship, one of which has been painted with phosphorescent paint, and is installed in a blacked-out space to emulate the original event. 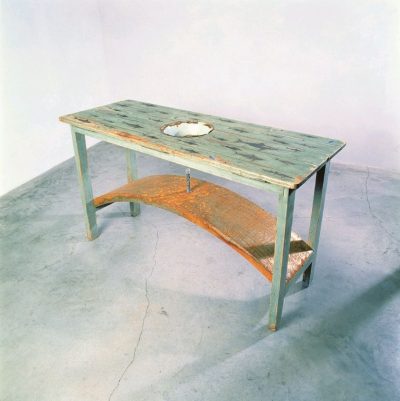