I tend to work in places of war and conflict, and that has tended to mean that the unburied ghost of colonial past is still wreaking tragedy in its gyre of resolution or dissolution, like a series of cyclones devastating a helpless undeveloped nation. Since I am a white male, my white-male gaze has made my positions quite defenseless, and I have sometimes been criticized for taking politically incorrect views (and I don’t tend to take positions in my practice, though I have them personally, of course, but do try to assume a neutral, non-didactic aesthetic strategy, which is itself a position, though it may not immediately appear to be). Being Irish, though, has allowed me to remain unapologetic, steering clear of the horrors of political correctness that white males often have thrust upon them in the course of their privileged, embarrassed discourse. It has also allowed me to travel freely in rogue nations who feel kinship with us Irish rogues. So, being Irish has allowed me to be more fully me, even though I don’t at all subscribe to any national identity.
Richard Mosse artist statement Changing States: Contemporary Irish Art and Francis Bacon’s Studio exhibition (2013)

Richard Mosse (b. 1980) holds an MFA in photography from Yale University and a postgraduate diploma in Fine Art from Goldsmiths, London. He also holds a first-class BA in English Literature from King’s College London and a master’s in Cultural Studies from the London Consortium (ICA, AA, Tate and Birkbeck). His work seeks to challenge and transgress traditional conventions of photography through unmitigated aesthetic strategies in situations of tragedy and conflict. Aperture Foundation and Pulitzer Center on Crisis Reporting co-published his first monograph, Infra (2012). It offers a fevered inflation of the traditional reportage document underlining the growing tension between art, fiction and photojournalism. Mosse initiates a dialogue with photography that begins as an intoxicating mediation on a broken genre, but ends as a haunting elegy for a vividly beautiful land touched by unspeakable tragedy. Richard Mosse represented Ireland at the 55th Venice Art Biennale with an immersive multi-screen video installation shot on 16mm infrared film in Eastern Congo. View Artist 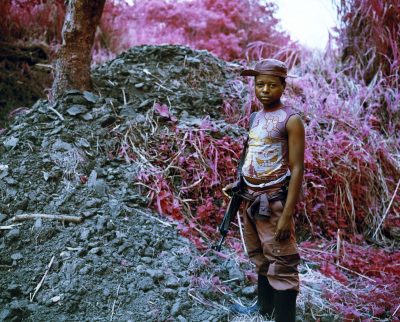 Growing Up In Public Richard Mosse 2011