Shot in Connemara in 1962 while he was a student at Yale, this is Michael Craig-Martin’s only film to date. It captures the essence of the landscape in a style that would colour the rest of his career. The seemingly basic approach echoes the starkness and stillness of the Irish countryside, while transcending the daily experiences featured in the work. Assumed lost or destroyed, the artist’s daughter re-discovered the film in 2000, it was donated to IMMA by the artist in 2005.

Born in Dublin, Michael Craig-Martin studied art at Yale University in America in the 1960s, where he was influenced by theories of conceptual art. In the 1980s Craig-Martin taught at Goldsmith’s College and was significant influence on the emerging YBA generation. Craig-Martin's early art practice involved the use of ready-mades. During the 1990s the focus of his work moved to painting, and to increasingly complex site-specific wall paintings. View Artist

Eye of the Storm Michael Craig-Martin 2003 On the Table Michael Craig-Martin 1970 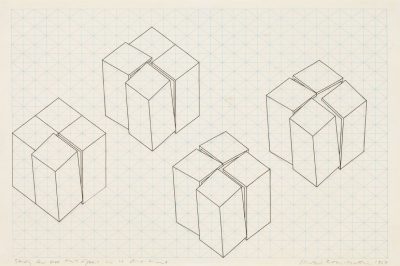