Skip to navigation Skip to content
X
Paul Henry, b.1876

Primarily a landscape painter, Henry’s early work often included figures working in the landscape. In later work, such as Errigal, Co. Donegal the figure and other representational objects, such as cottages and animals, are absent from the composition, suggesting a shift towards abstraction. This painting, like many of Henry’s landscapes, features a low horizon line with a mountain range in the middle ground, framed by expansive areas of sky with large cloud formations. In the early stages of his career charcoal was Henry’s preferred medium and he continued to use charcoal throughout his career in his preparatory sketches, many of which were done outdoors.
Henry constructs this image through form and colour rather than line. He employs a subdued, monochromatic palette which he uses to convey the mood and atmosphere in the painting, rather than attempting to depict the reality of the actual scene. 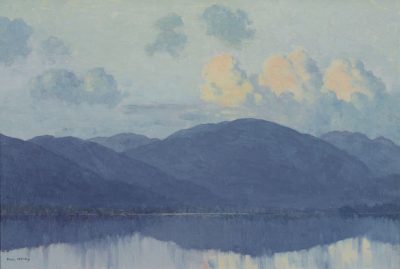