Through his work Yuki Okumura aims to illuminate and even reconcile the gap between the physical world itself and the work perceived by the human brain. 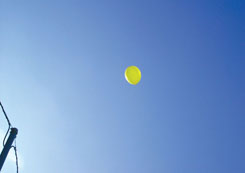 Through his work Yuki Okumura aims to illuminate and even reconcile the gap between the physical world itself and the work perceived by the human brain. He probes the concept of identity and what makes the human mind and self unique. One element of his practice has expanded the realm of body art through the creation of discrete and precious works constructed from fingernails and saliva. Okumura exploits the uneasy tension between the animate and inanimate. His other works play with the notion of time and travel, bringing us on impossible journeys with numbers, digestion, feedback and everyday objects.

Born in Aomori and based in Tokyo, Yuki graduated from Tama Art University and received an M.F.A. at the Tokyo National University of Fine Arts and Music (2004). In 2000, he was awarded the Grand Prix, Philip Morris Asian Art Awards. In 2001, he participated in First Steps: Emerging Artists from Japan, Grey Art Gallery, New York University. Yuki Okumura’s residency is supported by The Nomura Cultural Foundation and the EU Fest Japan Committee.