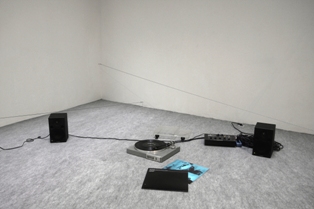 “In the ‘time-based text works’, I choose a particular sentence, choose a certain format of a sheet of paper and write the sentence for a period of six months or longer, everyday once. Of course, I play with the quality of the work as an object. That is. Is the work the daily physical exercise? A cognitive rumination on a message? An accumulation of graphite on a sheet at the end of the defined period? A long-term study? A combination of all of the above? A text can be as ‘pronounced’ as an act. As we know, a written sentence is not a recording of the human voice but a formal manifestation of language, which can outlive a voice. In other words it is the partner in a conversation, the exhibitor, the owner etc. who will create the work following an instruction sheet. The instructions – or are they decoys? – vary according to context, topic and place. The particular day or the amount of time spent producing them as well as the degree of involvement is an integral part of the work. Ideas of my sculptural objects or installation are mostly supported by different sources (but literature, philosophy or art history are as valid as every day observations or nameless references of an obscurer order). I do them because of the parlay between one’s own subjectivity and an ‘impassible’ art object. I want to see them dilate like a web of associations, interferences and allusions.” – Vittorio Santoro, New York, November 2010. Upcoming or recent solo or group exhibitions include The Unbearable Lightness of Being, Yvon Lambert, New York, 2011; Man Leaving Harbour on a Ship (in a Room), La BF15, Lyon, 2010; Annette and Peter Nobel Collection, Kunstmuseum St. Gallen and Museum der Moderne, Salzburg, 2010; La chambre de Marlow, Galerie Xippas, Paris, 2009; Shifting Identity, CAC, Vilnius and Kunsthaus Zurich, 2008; Three Attempts to Avoid the Inevitable, Les Complices, Zurich, 2008; The Truth About Your Own Tolerance for Cruelty, Cortex Athletico, Bordeaux, 2007; Learn to Read, Tate Modern, London, 2006.

Vittorio’s work was shown in the Process Room from 20 September until 02 October 2011.