British photographer Tom Hunter attended the London College of Printing and the Royal College of Art. Hunter’s photographic work deals with the representation of minority groups, often in the manner of religious compositions and classical art. Hunter has exhibited nationally and internationally, including solo exhibitions at the Printhouse Gallery, London; the V&A Museum of Childhood, London and Green on Red Gallery, Dublin. He participated in IMMA’s Artists’ Residency Programme in 2006. 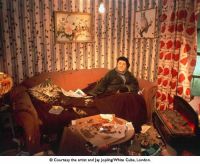 
Tom Hunter is a photographer based in London whose work deals with representation of minority groups. A series of photographs, portraying travellers and squatters, sparked off media reports which gave the impression that Hunter depicted these groups in a stereotypical and misinformed way. However Hunter’s practice is about giving a positive and dignified representation to his subjects. Reworking historic paintings and incorporating the use of colour and scale, Hunter highlights his subjects in the manner only given to the landed gentry and religious icons depicted in classical art.  Hunter studied at the London College of Printing and the Royal College of Art, London. Recent solo exhibitions include the White Cube, London, 2000; Yancey Richardson Gallery, New York, 2003; Domus Artium 2002 Museum, Salamanca, 2004, and is showing at the National Gallery, London, until 12 March 2006.