Öyvind Fahlström was a Brazilian-born Swedish multimedia artist. He studied Classical Studies and Art History at the University of Stockholm and was a regular contributor to the Swedish press on cultural topics, both local and foreign. In 1952, Fahlström produced ‘Opera’, a room-sized felt drawing, and in 1953 wrote a manifesto for concrete poetry. He studied in Italy and France before moving to New York in 1961 where he began the 'Sitting…' series. Fahlström represented Sweden at the 1964 Venice Biennale, and went on to paint, write plays, poems and radio broadcasts as well as make television documentaries on the anti-war movement. 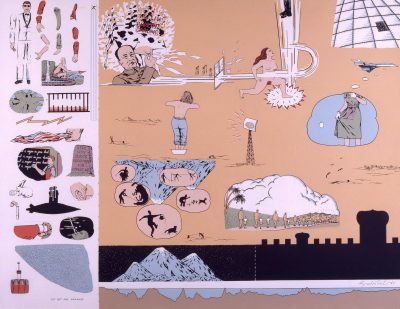