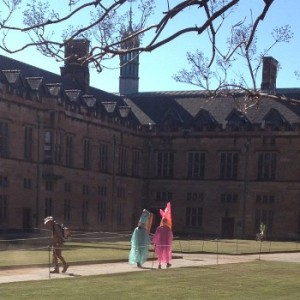 Sydney-based artist Mikala Dwyer creates playful, fantastical installations exploring matter and alchemical metamorphosis which immerse the viewer in mini-worlds investigating space, emotion and imagination. Expanding the limits of installation, sculpture and performance, Dwyer has established herself as one of Australia’s most important contemporary artists.
Dwyer has had solo shows at the Museum of Contemporary Art, Sydney and the Museum of New Zealand, Te Papa Tongarewa. She has participated in the Sydney and Adelaide Biennales. In 2012 Dwyer’s solo show Panto Collapsar at the Project Arts Centre, Dublin, continued to tour various venues around Ireland. She was included in Face up: Contemporary Art from Australia at Hamburger Bahnhof and Verso Süd at Palazzo Doria Pamphilj curated by Franz West. She is the recipient of numerous residencies, scholarships, grants and awards. Dwyer’s work is held in public collections throughout Australia and New Zealand.
http://mikaladwyer.com
Back to Artists A-Z