Frequently, while creating her work, Mariana Silva da Silva challenges the definition of 'coastline', a zone of contact between earth and sea. 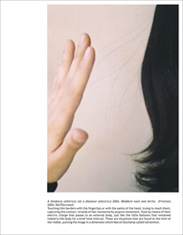 Frequently, while creating her work, Mariana Silva da Silva challenges the definition of ‘coastline’, a zone of contact between earth and sea. What crosses over, what is passed, what happens when bodies come into contact? Her artistic research revolves around the concept of contact, often with respect to thinking of skin as a border that can be crossed briefly, or at least as a limit that may be stretched through contact. Silva da Silva develops works that aim towards a minimal encounter point, she is interested in the experience of contact and of proposing other people’s involvement in her work by means of their participation in situations that are photographed or filmed. “Touch is a transient state, like a gaze that doesn’t remain, but that goes across us like breath, like a puff of air”. Mariana Silva da Silva produces coastline images, or perhaps it is better to say, situations that are on the coastline of images, situations of no-limits, the minutest dimension of the briefest contacts. Recent projects by Mariana include Small Distance, Palácio das Artes Museum, Belo Horizonte, Minas Gerias, Brazil, 2006 and Border Effects, Subjectivity and Public Spaces, Memorial do Rio Grande do Sul, Porto Alegre, RS, Brazil, 2005. Her residency is kindly supported by the UNESCO – Aschberg Bursaries for Artists.