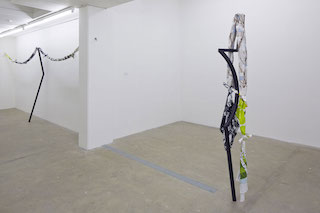 Often playing on the tension between exterior and interior, Thomsons’ practice is inspired by landscape imagery – specifically stemming from 19th Century European garden design and decorative arts. Focusing on the cultural ideology behind the manipulation of nature and the reproduction images of nature, Thomsons’ conceptual and multimedia approach attempts to provoke a re-examining of seemingly banal garden imagery within its carefully constructed political and historical context.

Edward Clydesdale Thomson is a Scottish/Danish artist based in the Netherlands. He is a graduate of the MFA program at the Piet Zwart Institute, Rotterdam and the Barch program at the Glasgow School of Art. He was resident at the Rijksakademie van Beeldende Kunsten, Amsterdam (2011 – 12). In 2011 he was awarded the Lecturis Award and nominated for the Prix de Rome. Notable shows include Causa Finalis, Galerie Fons Welters, Amsterdam, Prix de Rome, SMART Project Space, Amsterdam and Secret Gardens, TENT, Rotterdam.
http://www.edwardthomson.net
Back to Artists A-Z