Spanish sculptor Eduardo Chillida studied architecture before enrolling at the Círculo de Bellas Artes in Madrid. His first sculptures, in plaster and clay, were of human forms, but when he began to work in forged iron, steel, stone and concrete, he moved into abstraction. In 1958 Chillida received the international grand prize for sculpture at the Venice Biennale. He was elected an honorary academician by the Royal Academy in 1983. His sculptures are installed in cities and countries worldwide and have been collected by major museums, including MoMA, New York; Tate, London; Spanish Museum of Contemporary Art, Madrid and Kunsthalle Basel, Switzerland. 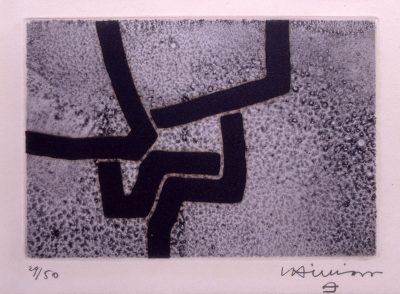