Highly attuned to his environment, no matter where he finds himself, Arthur Simms gets inspiration from diverse sources, both high and low. 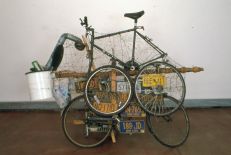 
Highly attuned to his environment, no matter where he finds himself, Arthur Simms gets inspiration from diverse sources, both high and low. Objects of transport, such as skateboards and bicycles, figure highly in his work. Born in St Andrew, Jamaica, Simms immigrated to Brooklyn in 1969. During the 1980s, Simms was struck by the sight of New York City’s homeless pushing grocery carts filled with their life’s belongings reminding him of the carts used to carry wares and produce to the market in his native country. Simms explains “In my art, I try to assimilate the essence of my Jamaican heritage. There are so many things that go into the work, but each part has a special significance, in the same way as if you had to carry all your belongings with you all the time.”

Simms sculptures have been shown at the Venice Biennial and around the US including venues such as the Queens Museum; the Neuberger Museum and Brooklyn’s Prospect Park.  He has also been featured at the Brooklyn Museum of Art and PS1 MOMA. Simms is a Guggenheim Fellow; a Rome Prize Fellow, he has also won funding from many foundations including, the Joan Mitchell Foundation, the Louis Comfort Tiffany Foundation, Creative Capital Foundation and the Rockefeller Foundation.

Arthur Simms work was shown in the Process Room, First Floor Galleries, from 8 to 20 July 2008.

here for more information and images