Aideen Barry is an artist whose means of expression are interchangeable, incorporating performance, moving image and sculptural manifestations. Employing visual trickery to create a heightened suspension of reality, the common denominator of Barry's work is an attempt to deal with anxiety. 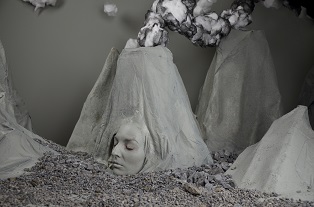 Aideen Barry is an artist whose means of expression are interchangeable, incorporating performance, moving image and sculptural manifestations. Employing visual trickery to create a heightened suspension of reality, the common denominator of Barry’s work is an attempt to deal with anxiety.

At play in her more recent works is an emphasis on optical fiction to generate a sense of cognitive dissonance. The viewer experiences the work in a paradoxical fashion: attracted and yet repelled. Barry often engages with the instance where something can be familiar, yet foreign at the same time, questioning an idea of phenomenology and resulting in situations of the uncomfortably strange and threatening. Feminist meditations on gynophobia and the monstrous are a McGuffin in her most recent moving image works.

Aideen Barry ( b. 1979 Cork)  is visual artist with a national and international profile, whose means of expression are interchangeable, incorporating performance, sculpture, film and lens based media. Barry recently showed a survey solo show at Royal Hibernian Academy entitled Brittlefield and will show at Block 336 London in the new year. She has been Artist in Residence on the IMMA residency programme since the beginning of summer ’16. Barry will undertake a fellowship at the Vermont Studio Centre (US) programme in 2017 and will show solo at MARFA Contemporary Texas in Jaunary 2018. She recently won the prestigious 2017 Lexicon Commission Award and Modern Ireland in 100 artworks from the Royal Irish Academy, she was awarded an Arts Council of Ireland Bursary Award in 2016.