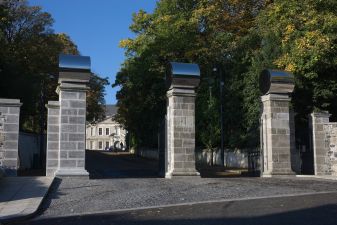 A new sculpture by leading Irish artist Fergus Martin will be unveiled in the grounds of the Irish Museum of Modern Art on Thursday 9 October 2008. The work, entitled Steel, was commissioned under the Government’s Per Cent for Art Scheme and is being erected on IMMA’s East Gate, as part of a major upgrading of the gateway by the Office of Public Works. The gate serves as the main entrance for visitors to the Museum and the new work will remain permanently in place there.

Steel takes the form of three stainless steel barrel-like structures, which are being installed on the pillars of the double gateway. The work has a timeless quality, uniting IMMA’s historic setting with its present-day function as the country’s leading centre for modern and contemporary art. Commenting on his approach to the commission, Fergus Martin said: “One of the first thoughts I had was wanting the sculpture to give people a feeling of surprise and happiness every time they saw it. When I went to look at the gates, and looked up the avenue, I couldn’t see where the   building ended because the trees blocked the view of the sides to the left and right. It gave me the idea of a form that didn’t appear to end. So these barrels are like cut chunks of a horizontal structure which could go on and on – like an underground river which surfaces here and there. If you think of them as surfacing on top of the pillars – ! – they’re like startled – startling – visitors.”

Fergus Martin’s practice extends across painting, sculpture and photography. The unveiling of Steel at IMMA will be followed the next day (Friday 10 October) by the opening of an exhibition focusing on a new body of sculpture and painting at the Dublin City Gallery The Hugh Lane. He will also take part in the RHA Annual Exhibition later this year and in Yo Mo’ Modernism at the CCNOA center for contemporary non-objective art in Brussels.

Born in Cork in 1955, Fergus Martin studied art at Dun Laoghaire School of Art from 1972 to 1976.  From 1979 to 1988 he lived and worked in Italy, where he lectured in the English language at the University of Milan. In 1988, he returned to full-time painting and has been living and working in Dublin since. In 1991 he attended the New York Studio School of Drawing, Painting and Sculpture.

Martin has exhibited in Ireland, France, Germany, Italy and America.  His work is included in public collections in Ireland, including those of the Irish Museum Modern Art and Dublin City Gallery The Hugh Lane, as well as many Irish and international private collections. He received awards from The Pollock-Krasner Foundation, New York, in 1999 and 2006, and was awarded The Marten Toonder Award by The Arts Council in 1999. In 2001 he was elected a member of Aosdána.

In 1996, Martin showed Six Paintings for Le Confort Moderne at Le Confert Moderne in Poitiers in France, as part of the Imaginaire irlandais festival. Untitled No 1 from this series is included in IMMA’s Collection.

The exhibition Pipe Dreams at The Butler Gallery, Kilkenny, in 2003, included his first sculptures in stainless steel, Lay and Double

In addition to his solo work, Fergus Martin joined forces with photographer Anthony Hobbs in 2003 to work on a series of projects. As Martin & Hobbs, they showed work in Venice and Dublin, with their exhibitions My paradise is here and My paradise is now. Their work Frieze was acquired by IMMA and was shown as part of the Tír na nÓg exhibition of recent acquisitions in 2004-05, and in Comharsana Beal Dorais (Next Door Neighbours) at The Rooms, St John’s, Newfoundland, in 2005. Martin’s last solo exhibition was Storm, at Green on Red Gallery, Dublin, in 2006. 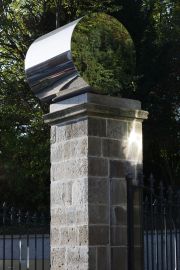 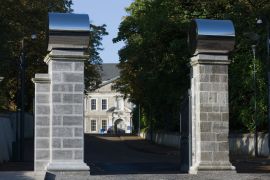